CHARLOTTESVILLE –– In normal times, the Teter household in Lakeland, Florida, would be less than bustling in early April.

Joya Teter would be home with her sons Matthew and Deacon, twins who are freshmen at Lake Gibson High School. But her husband, Doug Teter, would be away with Major League Baseball’s Detroit Tigers, for whom he’s the head athletic trainer, and their oldest child, Zachary Teter, would be at the University of Virginia, where he’s an offensive lineman on the football team.

But these are not normal times, of course, and instead of three sharing the house, there are seven these days: Mom, Dad, Matthew, Deacon and Zach, “plus our two adopted sons,” Joya said, laughing.

Those would be Kariem Al Soufi and Luke Wentz, teammates who like Zach enrolled at UVA last summer.

Al Soufi, an offensive lineman, and Wentz, a wide receiver, are from Germany, where they were teammates on the Paderborn Dolphins club. When the University announced last month that students would be switching to online classes after spring break, Al Soufi and Wentz looked into returning home to be with their families. Travel between countries has become problematic during the COVID-19 pandemic, however, and that wasn’t a good option for them.

“You just hate seeing people in a situation like that where it’s difficult for them to get home and they don’t really know where they’re going to be staying,” said Zach, whose locker adjoins Wentz’s at the McCue Center. “I was just trying to help teammates out as much as possible.”

When Joya and Doug learned from Zach, who was home on spring break, that Al Soufi was stuck in Charlottesville, they invited him to join them in Lakeland. Zach then mentioned to his parents that Al Soufi had told him Wentz was in a similar plight.

“I knew I couldn’t leave Luke by himself,” Al Soufi said.

He didn’t have to. “Doug and I kind of looked at each other and said, ‘Well, tell him to come on down, too. We’ve got plenty of room,’ ” Joya recalled.

And so Al Soufi and Wentz, who are roommates at UVA, flew on March 16 to Tampa, where the Teters picked up them and welcomed them into the family. Matthew and Deacon vacated their rooms and have been sleeping on a blow-up mattress elsewhere in the house.

“We can’t thank them enough,” Ralph Wentz, Luke’s father, said in an email from Germany. “It’s the best we can offer as humans, and this crisis shows that there is love and support for each other all around.” 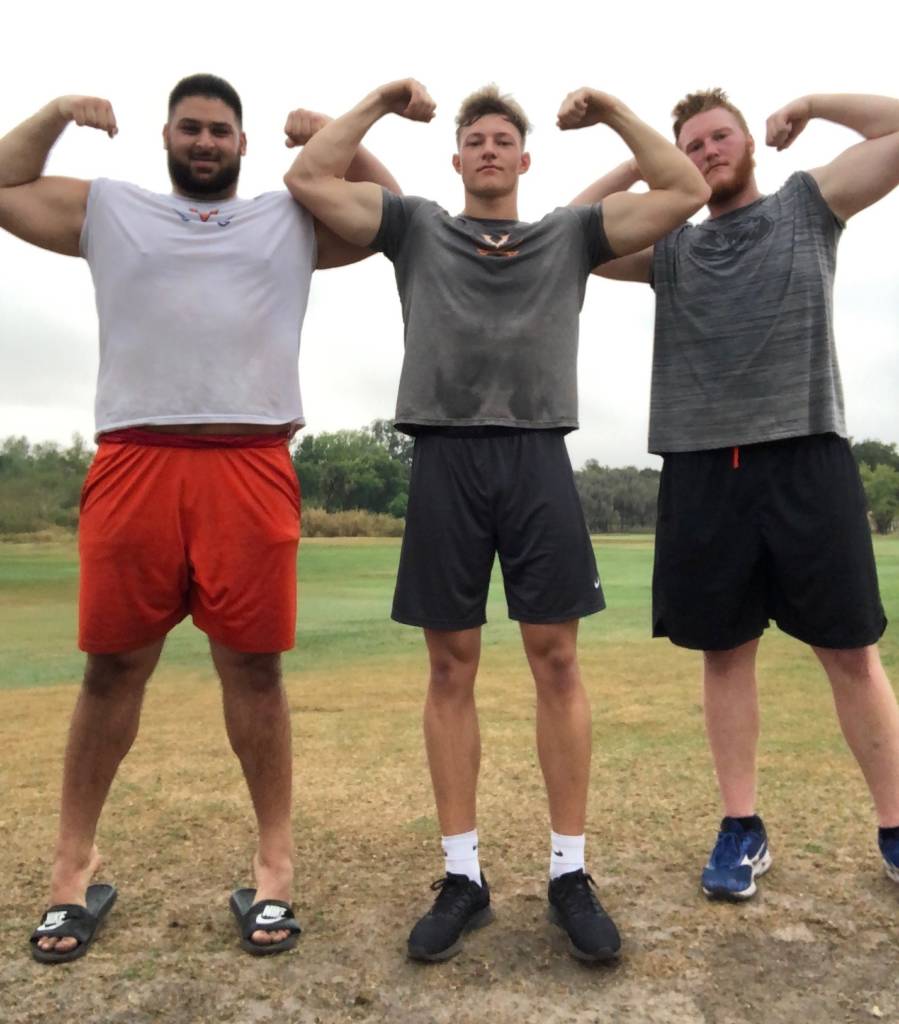 UVA offensive line coach Garett Tujague has checked in with Joya and Doug, and he marvels at the family’s generosity and hospitality.

“I mean, come on,” Tujague said. “They have two younger twin boys, and they don’t know these kids from Adam, other than what Zach told them, and they just opened their home without even batting an eye. It’s awesome.

“As a coach, how do you even pick up the phone and ask somebody to do that? If it’s a week, that’s one thing, but to be indefinite, there’s no way I could ask someone to do that. But they didn’t even bat an eye. They told me what they were doing, and it was way cool.”

Lakeland, home of the Detroit Tigers’ spring training facility, is about 35 miles east of Tampa. There are worse places to be in April than the Sunshine State.

“The weather is nice,” Luke Wentz said, and so are the accommodations at the Teter home. “It’s amazing,” Al Soufi said. “It’s a good harmony here. Everybody’s nice to each other, and it’s not just because we’re here.”

For Teter, Al Soufi and Wentz, all of whom redshirted last season, their schedule varies little during the week. They take online classes during the day and participate in Zoom meetings with their position coaches in the evenings: Marques Hagans for Wentz, who began his UVA career at quarterback, and Tujague for Teter and Al Soufi.

They also train regularly. They have access to a field on which they run, as well as a gym, a no-frills facility like something out of one of the Rocky movies.

“No bells and whistles,” Joya said, but plenty of iron. “They have all the weights we need,” Al Soufi said.

Teter said the “entire thing has been an interesting situation, to say the least. But our strength staff has definitely been doing their best to put us all in the best position possible, sending us workouts daily and telling us how to keep our bodies right.”

Doug Teter is rehabbing a couple of injured Tigers, and he reports to work every day. The twins, like the three UVA students, are taking online classes. The evening meal, Joya said, is “the one time in the day when we just all stop. We have a dining room table set for seven, and we all sit down together. It’s just nice.”

The conversation flows in any number of directions.

“We try to make it as normal as possible as we can, especially for Luke and Kariem,” Joya said. “We get to hear a lot about them, and we’re learning about them. I’m learning about the Muslim faith [from Al Soufi]. I didn’t know much about it. I’ve been asking Kariem questions, and they’re obviously anxious to want to try to go home.”

Al Soufi and Wentz flew home to Germany after the Orange Bowl, which capped the Wahoos’ 2019 season, and returned to Charlottesville 11 days later. Each talks to his family regularly on FaceTime.

Ralph Wentz said he hears from his son “more often than when he was in Charlottesville. We feel very close to him, although you would definitely love to take him in the arms and hug him in these strange times. But we know he is safe, he is with a great family, and with friends who have made it clear that he and Kariem can stay as long as they need to.”

The situation in Germany is improving, Al Soufi said, and he looks into flights home every couple of days. Luke Wentz said they hope to return to Europe in the next few weeks and remain there until the football team is allowed to reconvene on Grounds.

“We’re just basically telling them to talk to their parents,” Joya said, “because they can stay here however long they want. We’ve made sure that they know that, but we also understand that they want to be with their family, and we get that.” 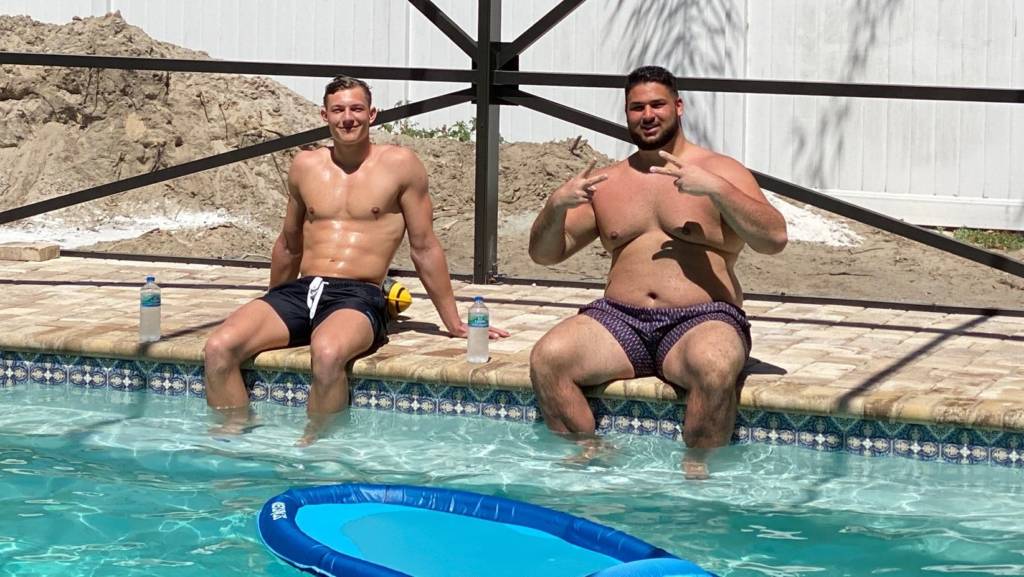 Ralph Wentz has never met Zach’s parents in person, “but we have FaceTimed and chatted online a couple of times, and we feel very connected,” he said. “As Joya put it, the boys and we are all family now, and we feel exactly the same.”

He said the Al Soufis and the Wentzes have “invited every member of the Teter family to visit us over here in Europe. We hope we can show them around some day.”

The Teters plan to take them up on that offer. For now, the family is enjoying life with its newest members.

“It’s been a blessing having them down here this entire time,” Zach said.

“It’s been a total godsend having them here,” Joya said. “It really has. They’re great young men. They’re very respectful. They want to help me every chance they get. These young men were raised right, and their parents did an amazing job with them.”

The Cavaliers are heading into their fifth season under head coach Bronco Mendenhall. His program’s guiding principles include Family First, Family Last, Family Always, and the Teters exemplify that creed.

“I’d like to think that what we are doing is the same that someone would do for our son,” Joya said. “Sports helps teach you to be a part of something greater than yourself. One thing I was taught and we’ve tried to instill in our boys is to help out when you can and always pay it forward.”

Hoos Focused on What They Can Control
Football