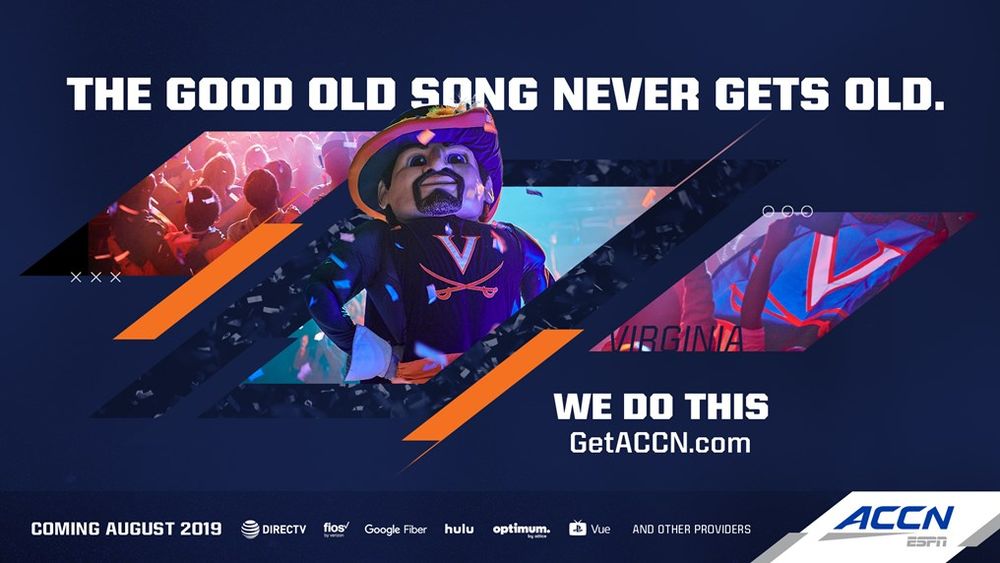 Get ACC Network
Where To Watch

About ACC Network
The ACC Network launched on Aug. 22, 2019. The 24/7 network airs ACC live events annually across its TV and digital offerings from around the conference’s 15 member schools and 27 sponsored sports.

Owned and operated by ESPN in partnership with the Atlantic Coast Conference, ACC Network is a 24/7 national network dedicated to ACC sports. Approximately 450 live contests including 40 regular-season football games, 150 men’s and women’s basketball games, and 200 other regular-season competitions and tournament games from across the conference’s 27 sponsored sports will be televised annually, plus a complement of news and information shows and original programming. ESPN has been televising ACC content since 1979 and has exclusive rights to every conference-controlled game across sports and championships.

Independent Cable Systems in Virginia
Listed below are the independent cable systems across Virginia carrying ACCN. If your provider is not carrying ACCN, please contact them and ask for ACCN to be added to the channel lineup.

PROGRAMMING & CONTENT
• Will ACCN be 24 hours a day, seven days a week?
ACCN will have 24/7 programming; it’s a dedicated linear and digital platform for all things ACC.

• What kind of shows will I see on the ACCN?
ACCN will offer live ACC sports and related studio programming 24 hours a day, seven days a week. Approximately 450 live televised events, including 40 regular-season football games, 150 men’s and women’s basketball games, and 200 other regular-season competitions and tournament games from across the conference’s 27 sponsored sports will be televised annually, plus a complement of news and information shows and original programming. Together, ACCN’s TV and digital platforms, ACCNE, will feature more than 1,300 ACC events in its first year.

• How will ACCN enhance the ACC fan experience?
ACCN will bring football, basketball and all ACC sponsored sports to ACC fans. It will provide more in-depth national coverage of all sports that are important to ACC fans, as well as more original content than ever before.  Fans will be able to access content on a range of devices.  Also, there will be programming dedicated to news and analysis surrounding the events.

• How many basketball games? Baseball? Women’s sports?
At least 450 events will be televised on ACCN each year. Of the 450 events, there will be more than 150 men’s and women’s basketball games and 200 other regular-season competitions and tournament games from across the conference’s 27 sponsored sports. ACCNX will include hundreds of live events and will be available to ACCN subscribers across a range of devices. ACCN will also be available via the ESPN App.

• Will there be academic programming?
We will aim to tell stories of the whole student-athlete, both on and off the field of play.

• Will ACCN be able to re-air games that were shown on other ESPN networks or Raycom?
Yes.

• Will ACC conference staff be on air or have any regular shows?
Yes.

AVAILABILITY
• How can I get ACCN in time for the August 2019 launch?
ESPN is working hard to ensure that ACCN will be broadly available via video providers across the country. Carriage agreements are already in place with the following video providers: Charter/Spectrum, YouTube Live, DIRECTV, Google Fiber, Hulu Live TV, Layer3 TV, Optimum, PlayStation Vue, Suddenlink, Verizon Fios, as well as, members of the NRTC and Vivicast Media and more. For the latest updates and list, please visit GetACCN.com. You can also contact your pay TV provider and request that they carry ACCN as part of its channel lineup.

• How do I get the digital part of the Network?
Once ACCN launches in August 2019, provided you are a customer who receives ACCN from your pay TV provider, you will have access to ACCNX via the ESPN App.

• What is the best way for fans and alumni who want to make sure their cable company carries ACCN?
Please visit www.GetACCN.com to show your interest in the Network and provide some general contact information. In addition, as an ACC fan, you can also contact your pay TV provider and request that it carries ACCN as part of its channel lineup.

• Will I be able to watch ACCN on my mobile phone or similar device?
Yes. ACCN will be available via the ESPN App on computers, tablets, mobile phones and TV connected devices.

• Can I pay to subscribe to ACCN online, Pay-Per-View or via ESPN3 if I can’t get it on TV?
No. The games will be exclusive to ACCN and ACCNX.

• How will this impact my cable bill?
ESPN negotiates wholesale rates, and retail prices are determined by each distributor. Services like the ACC Network add tremendous value, and given the popularity of ACC programming, the network will have broad distribution.

• Will all ACC campuses carry ACCN?
Campuses served by an affiliated provider will have access to ACCN.

• I live in [state outside ACC footprint]. Are you working to make sure we are able to see the ACCN too?
Yes. Our interest is in delivering this content in broadly distributed packages across the country.

• Where can I apply for a job at ACCN?
You can apply online at ESPNcareers.com.

• Will ACCN have an internship program?
ACC students will have the chance to apply for ESPN internships. Production opportunities also exist across all 15 schools to work on ESPN telecasts as part of the school control room project.