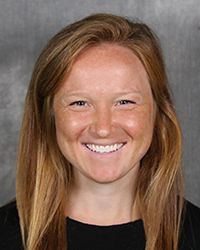 Parker played on the US Women’s Senior National Team from 2016 until she retired earlier this year after collecting her 50th international cap. As a member of Team USA, she competed in the FIH Pro League from 2019-20, including a ninth-place finish in 2019, and participated in the 2019 FIH Olympic Qualifier in Bhubaneswar, India.

Parker spent last season working as an assistant coach at Saint Joseph’s. She has also served as a club coach for Powerhouse and has seven years of coaching experience at elite camps at various NCAAI universities.

Parker played collegiately at Maryland, playing her freshman and sophomore seasons in the ACC, including winning the league title in 2013, before closing out her career with the Terps in the Big Ten. She was a two-time NFHCA All-Region honoree (2014-15) and won the Big Ten Sportsmanship award in 2014.

As a prep player, she led Glenelg High to two state championships was just the second player in NFSHSA history to score 100 goals and log 100 assists, finishing her high school career with 114 goals and 108 assists. She was named the Varsity Sports Network’s No. 1 Field Hockey Player of the Decade for the state of Maryland and was inducted into both the Glenelg High School and Howard County Women’s Athletics Halls of Fame.

Parker graduated from Maryland with a B.S. in family science from the School of Public Health in May of 2016.