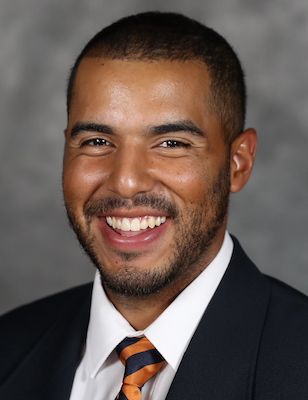 Jermaine Birriel enters his first season as Director of Operations for the Virginia men’s soccer program. The Fredericksburg, Va. native returns to the Commonwealth after serving as an assistant coach at Iowa Western in 2020.

While at Iowa Western, Birriel was the Reivers reserve squad head coach and assisted with the daily operations of the first team. Part of his responsibilities included the training and development of the program’s goalkeeper core which featured starting goalkeeper Patrick Millard who went on to earn NJCAA First Team All-America honors.

A 2020 graduate of James Madison University, Birriel worked a a student team manager for the Dukes for three seasons before being promoted to director of operations where he assisted with logistics, travel arrangements, equipment, player metrics and community service hours. During his time at JMU, the program reached an unparalleled amount of success by capturing two Colonial Athletic Association Championships and qualifying for the NCAA Tournament in 2018 and 2018. The Dukes reached the NCAA Tournament Quarterfinal in 2018 and finished the season ranked in the top-10 of each the major soccer polls.

Birriel holds a Bachelor’s degree in Kinesiology from JMU. He holds a United Soccer Coaches National F License and a Goalkeeping Level 1 Diploma.