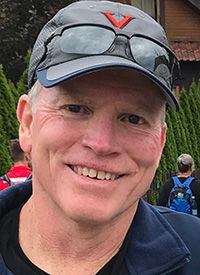 Kevin Sauer enters his 28th season as the head coach of the varsity Virginia rowing program in 2022-23 and has led the Cavaliers to 11 top-four finishes and 17 top-five finishes at the NCAA Championships. In addition, the Cavaliers have landed 12 top-six national finishes in the last 15 years. Sauer surpassed 1,000 career Varsity Eight wins at Virginia during the 2019 season.

A two-time Collegiate Rowing Coaches Association (CRCA) National Coach of the Year (2010 and 2012), Sauer has elevated Virginia to the most elite level of rowing programs around the country and has guided the Cavaliers to a pair of NCAA Championships, in 2010 and 2012.

Under Sauer’s tutelage, 45 student-athletes have earned 60 Pocock Racing Shells All-America honors and he has had 101 All-ACC selections. Virginia has had multiple All-Americans 19 of the last 20 years and at least one member on the first team in 20 of the last 22 seasons. Additionally, 17 Virginia rowers were named to the ACC’s 50th Anniversary Rowing Team. In 2022, a school-best 18 Cavaliers were named to the All-ACC Academic team.

The Cavaliers have also excelled in the ACC under Sauer, winning 21 of the 22 ACC regattas to be held, including the last 12 years. Virginia has won 86 of the 95 events to be held at ACC regattas, had 18 crews be named ACC Crew of the Year and Sauer himself has been honored as the ACC Coach of the Year 14 times. The 2020 rowing season and ACC and NCAA championships were canceled due to the coronavirus.

Sauer came to Charlottesville in the fall of 1988, when he was hired as the Virginia Rowing Club’s second full-time professional coach. He oversaw the direction of both the men’s and women’s club teams until the women’s team was upgraded to varsity status and began competition in the fall of 1995. Both teams thrived under Sauer, including the women’s Varsity Four winning the national championship in 1995.

Once at varsity level, it did not take long for Sauer to build Virginia into a national powerhouse. The Cavaliers finished fourth at the inaugural NCAA regatta in 1997 and have finished as the runner-up on three occasions (1999, 2005 and 2007). Virginia is one of just seven schools to claim the NCAA Championship (Brown, California, Harvard, Ohio State, Stanford and Washington are the others) and one of four schools to compete in at least 22 NCAA Women’s Rowing Championships. At each of those 22 appearances, the Cavaliers have not finished any lower than seventh.

In addition to NCAA success, the Cavaliers’ Varsity Eight has been the top collegiate crew in the Championship Eights at the Head of the Charles four of the past eight years and was the top overall crew at the 2012 regatta.

Sauer made his Olympic debut in 2016 in Rio, coaching former UVA two-sport athlete Meghan O’Leary and Ellen Tomek in the women’s double sculls.

In the summer of 2008, former UVA rowers Lindsay Shoop (Class of 2004) and Melanie Kok (Class of 2007) earned medals at the Olympics in Beijing, China. Shoop won gold with the U.S. women’s eight, while Kok was a bronze medalist with the Canadian lightweight double.

Overall at Virginia, Sauer has coached 19 rowers that have competed at the World Championships and nine Olympians, including one at each of the last five Olympiads.

A native of Indianapolis, Ind., Sauer received his bachelor’s degree in marketing and finance from Purdue in 1976 and was a member of the U.S. National Rowing Team in 1975 and 1977. While at Purdue, he rowed for the United States in the 1975 Pan American Games. He also competed in the 1977 World Rowing Championships.

Sauer continued his involvement in international competition as the rowing, canoe and kayak course contractor for the 1984 Olympics, 1987 Pan American Games, 1990 Goodwill Games, 1994 World Championships and 1996 Olympics. He also coached the U.S. Rowing Development Camp in 1997 and 2005, and served as a technical advisor for U.S. Rowing during the 1988 Olympic year before coming to Charlottesville that fall.

From 1997-2000, Sauer was a member of the High Performance Committee for U.S. Rowing, which makes plans for the coaching, selection and training of the national and Olympic rowing teams. In 2001, he was elected to serve as the South representative for the Collegiate Rowing Coaches Association, a position he held until 2008.

Sauer was inducted into the Pocock/Collegiate Rowing Coaches Association Hall of Fame on June 13, 2017.

Sauer and his wife, Barb, reside in Charlottesville. The Sauers have two children, Nick and Kelly, who also live in Charlottesville. Nick and wife, Lindsay, have two sons, Kevin and Nate, while Kelly and husband, Mark, have a daughter Colbie. Coach Sauer is the only one that does not have a University of Virginia degree.