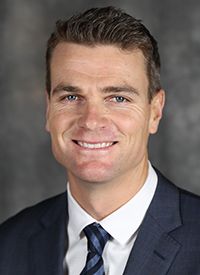 Kirk Penney joined the Virginia men’s basketball staff as a director of player development/coaching staff consultant in August of 2019.

He starred at the University of Wisconsin from 1999-2003 before enjoying a 15-year professional career. He helped the Badgers to the 2000 NCAA Final Four under the direction of Tony Bennett’s father, Dick Bennett, and became the first Badger since 1952 to earn consecutive All-Big Ten first-team honors in 2002 and 2003. Penney helped the Badgers to a pair of Big Ten titles during his all-league seasons, and Wisconsin advanced to the NCAA Sweet 16 in 2003. Tony Bennett was on staff during each of Penney’s four seasons at Wisconsin, including three seasons as an assistant coach from 2001-03.

Penney earned his undergraduate degree in landscape architecture from Wisconsin in 2015.

He and his wife, Audra, reside in Charlottesville with their daughters, Olivia and Ava, and son, Ben.