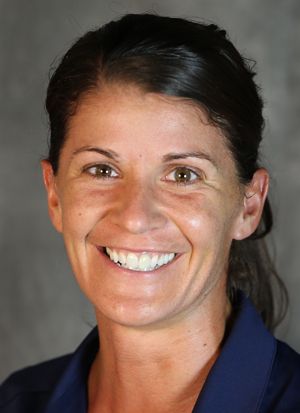 Rachel Dawson joined the staff in 2017 as an assistant coach after retiring from playing with the US Women’s National Team.

Dawson was a three-time Olympian, competing in Beijing in 2008 and London in 2012 and helped lead the Americans to a fifth-place showing at the Rio 2016 Olympic Games, where a valiant quarterfinal comeback against Germany came up just one goal short. Dawson, who has 298 international caps, won five golds in international competitions, including at the 2011 and 2015 Pan Am Games, and four silvers.

Dawson returned to USA Field Hockey as an assistant coach for the 2019-20 US Women’s National Development Team. On January 31, 2020, she was named the team’s head coach.

Dawson is an Atlantic Coast Conference veteran, graduating with distinction from the University of North Carolina where she was the 2007 Honda Award as the National Player of the Year for field hockey and was selected as one of the five finalists for the Honda-Broderick Cup as the nation’s top collegiate female athlete. With 19 goals that season, the midfielder was the top scorer for the No. 1 offensive team in the country while also being named the 2007 ACC Defensive Player of the Year and the 2007 ACC Tournament MVP.