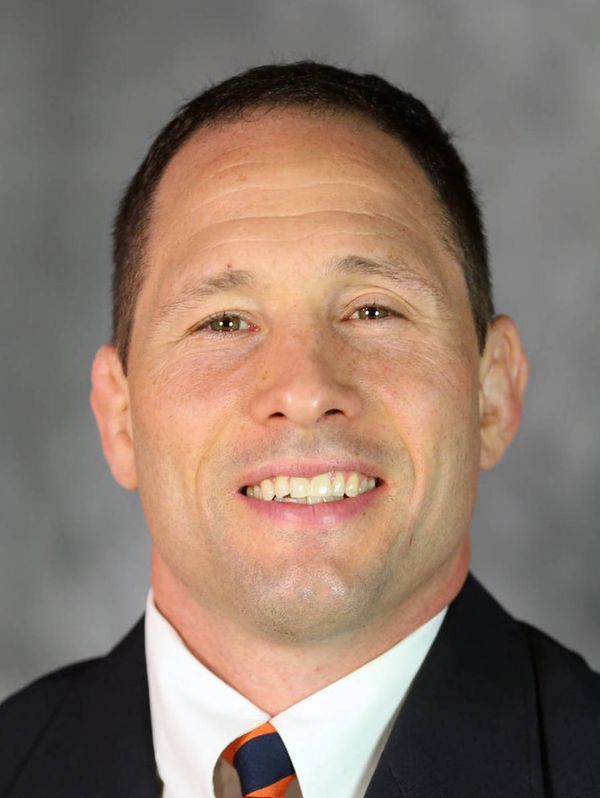 Former Cavalier All-American Steve Garland is serving in his 17th season as head wrestling coach at Virginia. A master motivator, recruiter and coach, Garland has worked diligently to push the Cavaliers among the nation’s elite. The results of Garland’s perseverance are evident.

In Garland’s first 16 seasons at Virginia, the Cavaliers earned 14 All-America honors and 19 ACC individual titles while qualifying 98 to the NCAA Championships and recording Top-25 team finishes at NCAAs in seven of the last 12 years the event was competed. He also led the Cavaliers to two ACC Championships, claiming the title in 2010 and 2015.

Virginia has had at least one All-American in eight of the last 12 seasons. UVA has a 173-102 dual record during Garland’s tenure, as he is the all-time leader in dual wins in school history. The Virginia wrestling program also has been a standout in the classroom; in 2013 UVA was honored by the NWCA as one of the top academic teams in the nation.

Garland and his staff have brought in multiple Top-25 recruiting classes throughout his tenure, including a program-best No. 5 ranking for the 2015 class. His 2007 recruiting class, which included UVA’s first three-time NCAA All-American, Chris Henrich, was ranked No. 5 nationally by W.I.N. Magazine and No. 8 by InterMat. This most recent class of freshmen for the 2022-23 academic year was ranked ninth nationally.

In the 2021-22 season, Garland coached eight wrestlers to NCAA Championship bids for the second consecutive season and Justin McCoy claimed All-ACC honors. Five wrestlers earned Scholar All-America honors for the second straight season with McCoy earning his third straight honor, Michael Battista and Patrick McCormick earning it for the second straight year and both Brian Courtney and Jarod Verkleeren earning their first honor. He also coached Jay Aiello to a bronze medal at the U23 World Games in freestyle.

In the 2020-21 season, Garland coached Louie Hayes to All-America honors and an eighth-place finish at the NCAA Championships as eight wrestlers earned bids to the annual event. It tied the second most qualifiers in a season in program history. Five wrestlers earned NWCA Scholar All-America honors for achievement in the classroom and on the mat with Hayes, Jay Aiello, Battista, McCormick and McCoy all receiving recognition.

In the 2019-20 season, Garland coached Jay Aiello to the ACC Championship at 197 pounds as he and Jack Mueller both earned All-ACC honors. In all, the Cavaliers had six wrestlers qualify for the NCAA Tournament and both Aiello and Mueller earned All-America honors. It was the third All-America honor for Mueller and the first for Aiello. The squad also had three wrestlers named as NWCA Scholar All-America selections – Aiello, Louie Hayes and Justin McCoy.

In the 2018-19 season, Garland coached five wrestlers to the NCAA Championships – including fifth-seeded Jack Mueller at 125 pounds and seventh-seeded Jay Aiello at 197 pounds. The two wrestlers earned the highest seeds in UVA history at their weight classes. Mueller went on to become the fourth NCAA Finalist in program history, falling to two-time NCAA Champion Spencer Lee of Iowa in the finals.

In the  2017-18 season, Garland coached six wrestlers to the NCAA Championships, including three first-time qualifiers in Louie Hayes (125), Will Schany (174) and Tyler Love (Hwt).

In the 2016-17, Garland coached George DiCamillo (141 pounds) and Jack Mueller (125 pounds) to All-America honors. DiCamillo became the third NCAA finalist in program history, while Mueller advanced to the semifinals and became the program’s first freshman to earn All-America honors. DiCamillo was named the ACC Wrestler of the Year, while Mueller was named the ACC Freshman Wrestler of the Year.

In the 2015-16 season, Garland coached five wrestlers to NCAA Championship appearances, including three-time ACC Champion George DiCamillo (133 pounds) who became only the seventh wrestler in UVA history to earn three ACC Championships in his career.

Virginia won its second ACC Championship under Garland in 2015 and earned a 19th-place finish at the NCAA Championships. Three Cavaliers made the NCAA Round of 12 and seven qualified for NCAAs, with Nick Sulzer (165 pounds) advancing through to claim All-America honors for the third straight year as he became the second three-time All-American in program history. Virginia rolled to the ACC Championship by 14.5 points over Pitt as Sulzer and George DiCamillo each won titles while all 10 Cavaliers finished in the top four at their respective weight classes. UVa defeated four ranked opponents during the dual season, including a pair of top-10 foes, Edinboro and Pitt.

Eight Virginia wrestlers qualified for the NCAA Championships in 2014, with a program-record five Cavaliers earning national seeds. With a fourth-place finish at 165, Nick Sulzer notched All-America honors for the second straight season. Sulzer and Blaise Butler (157) each claimed ACC championships as well. UVa went 18-3 in the regular season – the second-most dual wins in program history – and reached as high as No. 11 in the national polls.

Virginia set program records with nine NCAA qualifiers and four national seeds in 2012-13. Jedd Moore (157 pounds) and Nick Sulzer (165) each earned All-America honors while Matt Snyder (125) and George DiCamillo (133) reached the All-America round. DiCamillo was crowned the ACC champion at 133 pounds, becoming the first UVa freshman to win an ACC title since 1995.

The Cavaliers recorded a program-best No. 11 national ranking during the season and defeated then-No. 9 Central Michigan at the Virginia Duals, marking the first top-10 opponent that Virginia has ever beaten. UVa posted a 16-4 record in dual matches before narrowly finishing second at the ACC Championships and taking 21st at the NCAA Championships.

Virginia also was honored as one of the top academic teams in college wrestling in 2013 as UVa recorded the fifth-best GPA nationally (3.239), while a national-best eight Cavaliers wrestlers were named to the 2012-13 NWCA All-Academic Team. Matt Snyder was named an Academic All-American for the second straight year.

Virginia had another standout year in 2011-12 as three Cavaliers won ACC championships, while the team went 11-1 in dual matches. In recording a 91.7 winning percentage, the Cavaliers set a program record. Matt Snyder (125 pounds), Nick Nelson (141) and Jon Fausey (184) all won ACC titles, while Snyder also was honored as an Academic All-American. A league-high seven Cavaliers were named to the All-ACC Wrestling Academic Team.

Virginia recorded a strong 2010-11 season as the Cavaliers posted their second straight Top 25 finish at the NCAA Championships after taking 23th place. UVa produced a pair of All-Americans, as Derek Valenti (149) and Chris Henrich (174) each reached the podium at NCAAs, while seven Cavaliers qualified for the national championships.

As a team, UVa won a school-record 19 dual meets during the 2010-11 season, including a victory over then-No. 14 Kent State, which at the time was the highest ranked opponent that Virginia had defeated.

Garland won ACC Coach of the Year honors in 2010 as the Cavaliers won the ACC title for the first time since 1977. UVa took 15th place at the NCAA Championships – the second-best NCAA finish in program history. A school-record eight Cavaliers qualified for the NCAA event. At the ACC Championships, Henrich and freshman Mike Salopek won individual championships but the championship was a total team effort. All 10 competing Cavaliers reached the semifinal round and posted finishes of fourth place or better. Henrich finished 35-3, while Brent Jones earned the Gorrarian Trophy at the NCAA Championships.

Virginia qualified seven wrestlers to the NCAA Championships in 2009, despite an injury-riddled season. Henrich was named an All-American at 174 pounds after taking seventh place at the national championship. He went 40-3 during a dominating season. For the second straight year, Virginia took second place at the ACC Championship, again falling just two points shy of the title. Henrich, Caponi (184) and Brent Jones (197) all earned ACC titles, and Jones was named the tournament’s Most Outstanding Wrestler.

In 2007-08, the Cavaliers went 18-5 in dual meets (3-2 ACC) in setting the then-school record for dual-meet wins. Chris Henrich was named ACC Freshman of the Year and joined Michael Chaires on the Amateur Wrestling News All-Rookie Team. In January 2008, Virginia earned its first-ever national ranking in the W.I.N. rankings at No. 25.

With a young lineup including four freshmen and three sophomores, UVa made major waves at the ACC Championships in taking runner-up honors to Maryland, falling short of the title by just two points. UVa wrestlers finished in the top three in nine of 10 weight classes, with Ross Gitomer (125) and Rocco Caponi (184) earning championships. Both were named All-ACC, as were Henrich and freshman Nick Nelson. Gitomer, Caponi and Henrich all advanced to the NCAA Championships.

Garland’s Cavaliers notched an 8-10 overall mark in his opening campaign in 2006-07. Under Garland’s tutelage, Caponi captured the ACC title at 184 pounds, while Eric Albright was the league runner-up at 133. Both earned a berth in the NCAA Championships, where Albright won three matches. The duo also earned All-ACC honors, as did freshman Kellon Balum.

PRIOR TO VIRGINIA
Garland was appointed to his post on April 20, 2006, after serving the previous six seasons as an assistant coach at Cornell, where he helped the Big Red to four-consecutive top-11 finishes at the NCAA Championships. He spent his final four seasons at Cornell as the top assistant under 2005 NCAA Coach of the Year Rob Koll. Garland was named the 2005-06 NCWA Assistant Coach of the Year after helping the Big Red to a top-five finish at the NCAA Championships.

The Cornell wrestling team finished in the top five at the NCAA Championships two years in a row (2005-06) and the top 11 at the NCAA Tournament for four straight seasons. The Big Red won the Ivy League title in five of Garland’s six seasons. He worked closely with and was integral in the development of four-time All-American (2001-05) and two-time NCAA Champion Travis Lee and true freshman NCAA finalist Troy Nickerson (2006).

VIRGINIA WRESTLING CAREER
Garland, a 2000 Virginia graduate, was a three-time Atlantic Coast Conference finalist and winner of the ACC championship at 125 pounds in 1997. He qualified for the NCAA championships in each of his three years of competition. At the 2000 NCAA Championships, Garland earned All-America honors, falling in the national title match after he upset the top seed, Jody Strittmatter of Iowa, 9-7 in overtime, in the quarterfinals. Garland currently is tied for 14th all-time in career wins at UVA (91).

In 2000, Garland was named the ACC Wrestler of the Year. In his career, he compiled 91 wins, including a 30-5 mark during his senior season, when he competed in the NWCA All-Star meet. He also was a member of the 50th Anniversary Atlantic Coast Conference Team.

PERSONAL
Garland is currently on the Board of Directors for the National Wrestling Coaches Association and has served on the NCAA Division I Wrestling Rules Committee.

Garland and his wife, English, are the proud parents of two daughters, Sarah and Grace.

*2020 NCAA Championship not wrestled due to COVID-19 pandemic