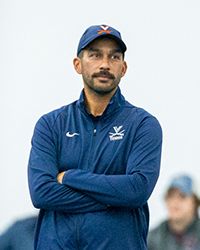 Huey is one of the Cavaliers’ most successful professional players, The doubles specialist has won eight career ATP doubles titles, including three 500-level tournaments, and made the 2013 1000-level ATP Masters Indian Wells final. Ranked as high as No. 18 in the world, he has appeared in 28 Grand Slams, including advancing to the Wimbledon semifinals in 2016.

Huey has also represented the Philippines nine times in the Davis Cup and is a three-time gold medalist at the Southeast Asian Games. He was also a member of World Team Tennis’ Washington Kastles in 2012.

Huey will be balancing his coaching duties while still actively playing professional tennis. Huey opened the 2022 season by advancing to the second round of the Australian Open.

Huey was a two-time All-American, a four-time All-ACC honoree and the 2008 ACC Championship MVP. He helped lead the Cavaliers to their first ITA National Team Indoor Championship in 2008. He spent 17 weeks ranked with a No. 1 ITA doubles ranking and holds the program record for career doubles victories with 134 and is ranked second in combined doubles and singles wins with 263.

Huey graduated from Virginia in 2008 and has returned to live in Charlottesville.