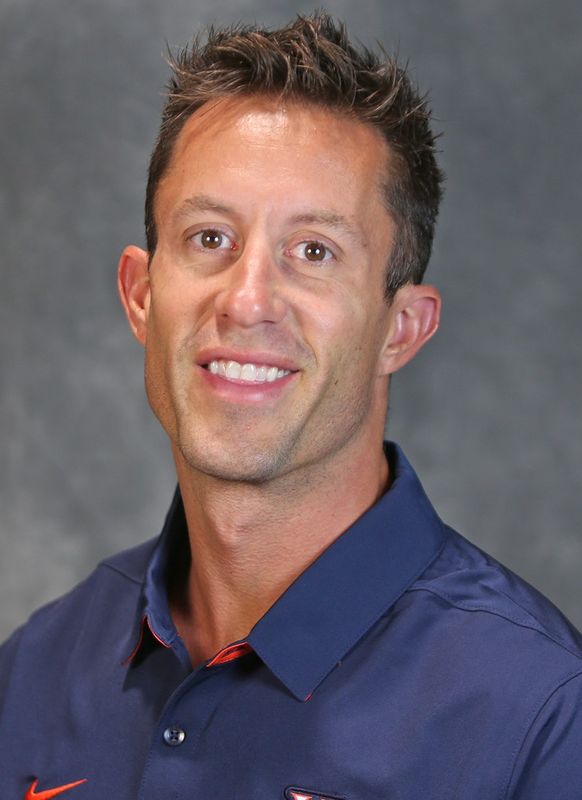 Tyler Fenwick joined the UVA coaching staff in August 2017 as the men’s and women’s associate head coach, working with the mid-distance, distance and individual medley swimmers.

Fenwick helped guide Virginia’s women’s team to the program’s first NCAA Championship in 2020-21. UVA won six national titles in individual and relay events at the NCAA Championships, the most ever by an ACC program. The Cavaliers had 12 athletes named to CSCAA All-America Teams (10 first team and two second team). Virginia also won its third women’s ACC Championship in four years, and league-record 17th overall. The men’s team had its best finish at NCAA’s since 2011, placing ninth overall, and picked up 28 All-America honors. Matt Brownstead won ACC titles in the 50 free and 100 free and the men’s team had five All-ACC honors.

The women’s team won its second ACC title in three years during the 2019-20 season and 16th title in program history. The women’s team set an ACC record for most points scored at the conference championships as the team captured 10 ACC titles and earned 17 All-ACC honors. Fenwick also helped the men’s team to its best finish since 2013, placing second at the conference meet. He coached Ted Schubert to a pair of ACC titles as the senior won the 200 and 400 IM. The men’s team earned six All-ACC honors at the meet.

In his second year with the Cavaliers, Fenwick helped the women’s team to a sixth-place finish at the NCAA Championships and the men’s team to a 10th-place finish. He coached Brendan Casey to three All-America honors and two ACC titles, in addition to seeing Casey tie as the top point scorer at the ACC Championships. Including Casey, Fenwick coached five All-American honorees. Fenwick was also named to the U.S. National Team coaching roster and served as a member of the U.S. Pan Pacific coaching staff.

During the 2017-18 season, Fenwick’s athletes set four school records and helped the Cavaliers capture the women’s ACC title and finish third on the men’s side at the conference meet. He coached six All-Americans and helped coach Brendan Casey to a fourth-place finish at the 2018 U.S. Open Water Championships. Fenwick was named a U.S. national team coach, alongside head Virginia coach Todd DeSorbo. He also served as an assistant coach for the U.S. team at the Pan Pacific Championships.

Fenwick served as the associate head coach at Tennessee from 2012-17. During his time with the Volunteers, he helped coach four U.S. Olympians, while guiding the team to 100 All-American selections and 36 school records.

Over the course of his career, Fenwick has coached nine U.S. Olympians, including one gold medalist and four silver medalists, and has seen one swimmer from the past three U.S. Olympic Trials qualify for the Olympic team. He was the primary coach for a U.S. world championship medalist, who earned a gold and silver medal at the meet, one Pan American Games silver medalist, and one gold and one bronze U.S. Junior Pan Pacific Championship medalist. Fenwick has coached a male and female All-American swimmer in every event at the NCAA and has had at least one swimmer compete in every event at the Olympic trials.

Fenwick attended Germantown Academy in Philadelphia. He holds a bachelor’s degree in English from William and Mary and a master of science degree in sports management from Tennessee.