A Quick Look at the Cavaliers' Fall Season 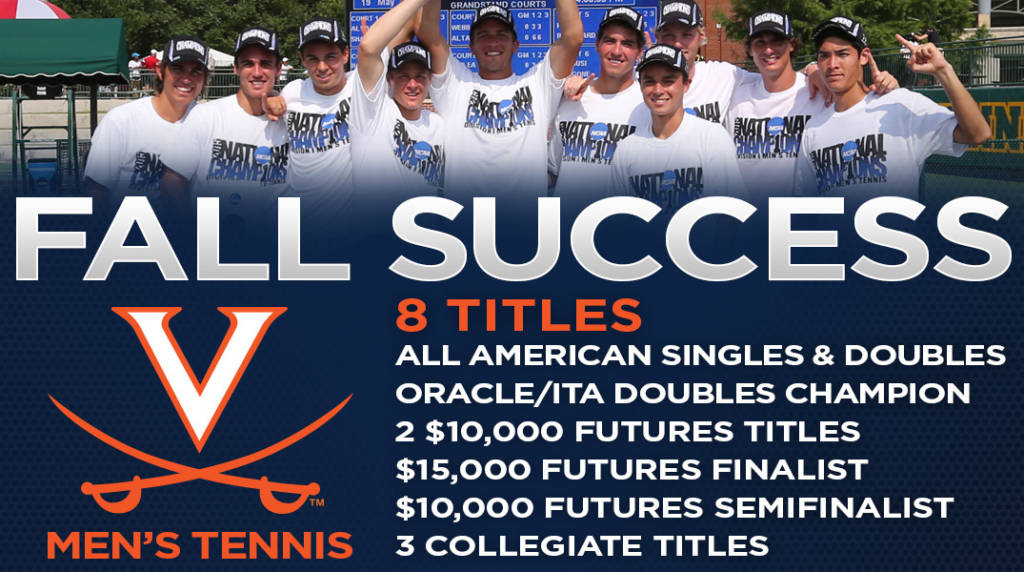 To say that this was a successful fall for the Cavaliers might be an understatement. Since late summer, UVA players have won three collegiate national championships, three ITF Futures tournaments and several other collegiate tournament titles.

In the three national collegiate championships contested in the fall, the Cavaliers won three titles.

In September. Ryan Shane and Luca Corinteli won the doubles title at the first collegiate championship of the year, the Oracle/ITA Masters tournament in Malibu which featured sixteen of the top returning Division I men’s and women’s singles players, along with eight outstanding men’s and women’s doubles teams. Shane also won the consolation singles bracket.

Shane also competed in the main draw of the US Open, winning a set in his opening-round match against World No. 27 Jeremy Chardy.

Henrik Wiersholm played in a pair of Futures qualifying tournaments, advancing through qualifying and into the main draw at both the Texas Tamale Company Houston Futures and the Pensacola Futures. Wiersholm went on quite a run in Pensacola, earning his first career ATP points with a victory in the main draw opening round and then going on to win the tournament. Wiersholm had a stretch during his title run where he won 28-straight games.

Virginia’s first official match of the spring season will be on Sunday, January 31 when the Cavaliers host Kentucky at 12 noon at the Boars Head Sports Club.

Montes Advances to Second Round of Charlottesville Challenger
Men's Tennis

Montes Advances to Second Round of Charlottesville Challenger