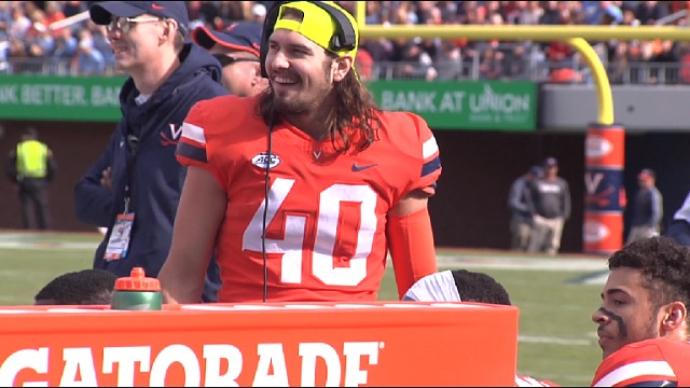 This Saturday’s #UVAFB game against Liberty is Senior Day. Leading up to the event, Damon Dillman of @CBS19 shares this great profile of inside linebacker CJ Stalker. Stalker has been at Virginia since enrolling early in the spring of 2015 and  was so highly-regarded by the previous UVA coaching staff that he spent time that first spring practicing with the first team defense. He’s made 13 career tackles in 20 college games with the Cavaliers, with all of that playing time coming in his first three seasons. Stalker has spent his senior season wearing a few different hats for the Cavaliers. During the week, he’s been leading the “Mad Hatters” — the nickname given to UVA’s scout team defense. On game days, Stalker can been seen wearing a lime green hat on the team’s sideline, signal-calling to the defense on the field. Bronco Mendenhall also believes he knows what the future holds for Stalker. Click on the link to find out… 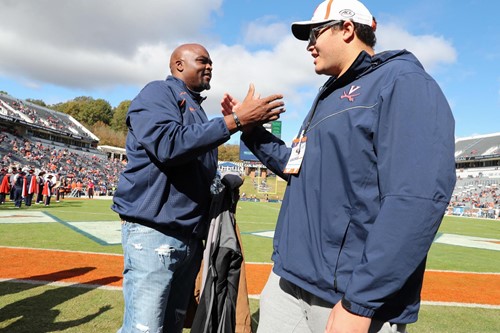 Former #UVAFB first team All-American Ray Roberts was a first-round draft pick for the Seattle Seahawks and went on to part of the offensive line that helped Detroit Lions Hall-of-Famer Barry Sanders rush for more than 2,000 yards when he was the league’s Most Valuable Player in 1997. It is his off-field accomplishments, though, that truly distinguish Roberts, as detailed in this wonderful UVA Today profile by Whitelaw Reid. Since July 2017, Roberts has worked for Special Olympics as the director of Unified Champion Schools for urban development. A Unified Champion School uses a combination of unified sports (sports combining students with and without intellectual disabilities), inclusive leadership programs and whole-school engagement as a way to promote acceptance, respect and inclusion for all students.