MINNEAPOLIS – His 11-year-old son despaired when Purdue’s Carsen Edwards banked in a 3-pointer late in the second half last Saturday night, but attorney Kenton Edelin never lost hope. At the family’s home in Fairfax Station, Va., they were watching the Elite Eight showdown between Virginia and Purdue.

“I said, ‘The game’s not over. Let’s see what happens,’ ” Edelin recalled in a phone interview. “And sure enough, we went to overtime and won.”

The Cavaliers, of course, needed a shot-heard-around-the-hoops-world buzzer-beater from Mamadi Diakite to force overtime against Purdue, but Edelin knows all about improbable stories. He’s a former walk-on who became one of the leaders of the UVA  team that advanced to the Final Four in 1984 after barely making the NCAA tournament.

Those Wahoos went 6-8 in ACC play during the regular season and were 17-11 after losing in the first round of the conference tournament. But Virginia received the No. 7 seed in the East Region and proceeded to silence all its critics.

After escaping the first round with a 58-57 win over 10th-seeded Iona, UVA edged second-seeded Arkansas 53-51 in overtime.

Those games were played in East Rutherford, N.J. The next two were in Atlanta, where Virginia defeated third-seeded Syracuse 63-55 and then stunned fourth-seeded Indiana and its Hall of Fame coach, Bob Knight, 50-48.

In the middle of it all was Edelin, a 6-8 post player from Hayfield High School in Alexandria, Va.. In the Elite Eight, he stole the ball from Indiana’s Dan Dakich near midcourt and dribbled in for a layup that put the ‘Hoos ahead for good. Edelin, who shot 52.5 percent from the line that season, then hit 3 of 4 foul shots to keep the Hoosiers at bay.

“He’s the worst [free-throw shooter] I’ve ever coached, except when it counts,” head coach Terry Holland told The Washington Post that spring. 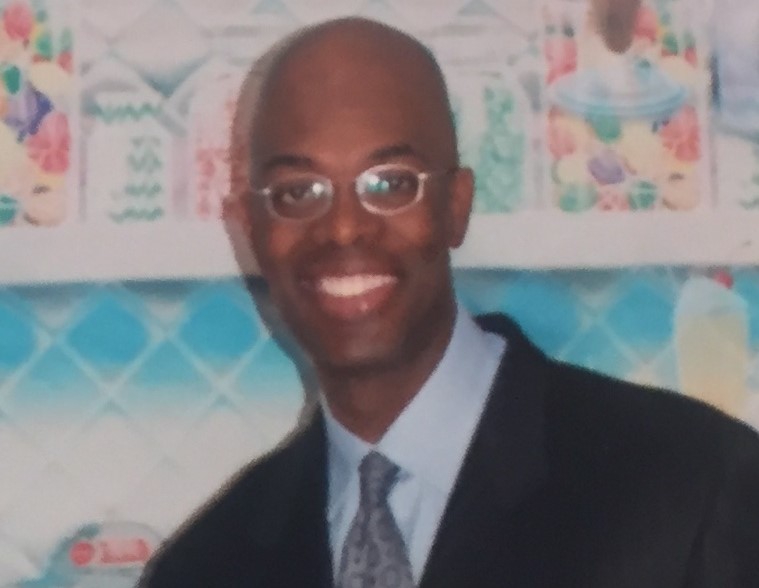 When Edelin enrolled at the University in 1980, neither he nor Holland ever could have envisioned such a turn of events. During his solid but unspectacular career at Hayfield, Edelin had attracted little attention from college programs.

Basketball played no part in his decision to attend UVA.

“I applied like every other student and was accepted to UVA and went there just to go to college,” said Edelin, who decided at an early age that he wanted to be a lawyer. “I think my parents paid maybe $2,000 or something for a whole year. You couldn’t get a better education for that price anywhere in the United States.”

As a first-year student, though, Edelin dominated pick-up games around Grounds, and his friends urged him to try out for Virginia’s junior-varsity team. (That program has long since been disbanded.)

Former UVA star Marc Iavaroni was in charge of that team, and he “told Coach Holland at the end of our JV season that he thought he had one player that might be able to help the varsity, which was me,” Edelin said.

In September of his second year at UVA, Edelin tried out for and was offered a spot on the varsity as a walk-on. A few months later, when one of Holland’s players transferred to another school, Edelin was put on scholarship.

Those were the Ralph Sampson years at UVA, and Edelin didn’t expect to play a significant role when he joined the team in 1981-82. He soon learned differently.

“I remember the first game we played, we were playing BYU,” Edelin said. “About five minutes into the game, Ralph gets his second or third foul, and Coach Holland puts me in the game, and I was like, ‘What?’

“I’m supposed to be [on the bench] looking at these guys playing, not playing. But that’s how it started, and Coach Holland just used me primarily as a guy to speed up the tempo and obviously to try to put defensive pressure on the other team. That’s really how he used me, until my senior year, when I played a lot more minutes.”

Jim Miller, who was a year behind him at UVA, has fond memories of playing with Edelin.

“What he brought to the rest of us, as a walk-on, [was the mindset that] the game was never this huge, more-important-than-life type of thing. He [played] because it was a game. And what I admired most about him was his ability to compartmentalize. So if practice started at 3, he’d show up at, like, 2:45, tie up his shoes, and boom, at 3 o’clock, he’d go out there, and he played as hard as anybody in practice for two hours.”

Miller laughed. “And then at 5:05, he was taking his sneakers off, and he was going off to do what [aspiring] lawyers do, I guess. He didn’t carry [basketball with him everywhere]. The rest of us were like, ‘Man, I’m playing poorly,’ or ‘I didn’t get enough playing time last night’ or whatever. I loved that about Kenton. He was a great teammate.”

Edelin, who led the Cavaliers in rebounding as a senior in 1983-84, never was a prolific scorer. He averaged 3.6 points as a sophomore, when UAB upset Virginia in the NCAA tournament’s third round, and 2.1 points as a junior, went NC State knocked off UVA in the Elite Eight.

“I think because of the fact that we had played with Ralph in so many big games over the years, and we had senior leadership on that ’84 team, we were prepared for anything,” Edelin said. “There was no game too big for us to play, because we had played on a national stage, at least for me, for two years with Ralph.

Unlike the ’83-84 team, the current Cavaliers did not have to sweat out Selection Sunday. UVA won a share of the ACC’s regular-season title and was awarded a No. 1 seed in the NCAA tournament. Still, Edelin said, he sees similarities between the two teams.

“We had senior leadership [in 1983-84],” he said, “and now we have a bunch of older guys that are good. They’ve been around. They’re battle-tested. They’re not afraid to take the big shots. I think that really is important under pressure, that the guys are comfortable in the limelight.”

The ’83-84 team also had an exceptional staff that included not only Holland but Dave Odom, Jim Larranaga, Jeff Jones and Seth Greenberg, all of whom went on to great success as head coaches.

The Final Four was held in Seattle that season. Virginia’s semifinal opponent was Houston, whose center was the great Akeem Olajuwon. The Cavaliers slowed the pace and had a chance to win in regulation, but the Cougars prevailed 49-47 in overtime.

It wasn’t the ending Edelin wanted, but he still cherishes memories of that season. “We had a great run to the Final Four, and the guys I played with are still very good friends of mine,” he said.

Edelin graduated from UVA in 1984 with a bachelor’s degree in government. By then, he’d been accepted by UVA’s law school. But after the Indiana Pacers selected him in the seventh round of the NBA draft in June 1984, he decided to put law school on hold.

“When I got drafted, I was surprised,” he said, “but I saw it as a once-in-a-lifetime opportunity. Law school will be there. If someone gives you a chance to play in the NBA, you have to try. Because if you don’t try, you’ll wonder for the rest of your life if you could have made it, and I said, ‘Well, I’m not going to do that. I’ll go out here and see what happens.’ And I got close.”

Edelin played in 10 games for Indiana in 1984-85. In the summer of ’85, Edelin recalled, he approached George Irvine, then the Pacers’ head coach.

Edelin started law school at UVA in 1985 and graduated in ’88. He then moved back to Northern Virginia, where he’s lived ever since. He’s now general counsel for two small minority-own companies (WDC Solar, Inc. and JHJ Facilities) and also is registered as an NBA player agent.

He hasn’t spent much time with Tony Bennett, who’s in his 10th season as the Cavaliers’ coach, but they spoke in September 2016 during a reunion in Holland’s honor at John Paul Jones Arena.

“He paid me a compliment on my kids, how well-mannered they were,” said Edelin, who has a 14-year-old daughter in addition to his son. “So it wasn’t basketball-related, but I appreciated that.”

Like scores of UVA basketball alumni, Edelin has followed the Cavaliers’ historic run in this NCAA tournament, and he’ll be cheering for them this weekend.

“I had mixed emotions when they got to the Final Four, because it was great to say we were the last team that went,” he said, laughing. “But I guess it is time for a new team to take over that claim.”