A couple of alumni updates to start your week. First up, @UVAWomenSoccer. The USWNT has a new head coach and UVA women’s soccer alum Morgan Brian is one of three Cavaliers fighting for a spot on the roster for the 2020 Olympic team with the new head coach using recent games as a chance to examine talent as he makes his decision on who will head to Tokyo to represent the red, white and blue. Brian couldn’t have hurt her cause as she scored the second goal last night to help the US pick up a 6-0 win over Costa Rica.

And then in @UVAMensHoops, Kyle Guy was, well, being Kyle Guy out in an NBA G League game 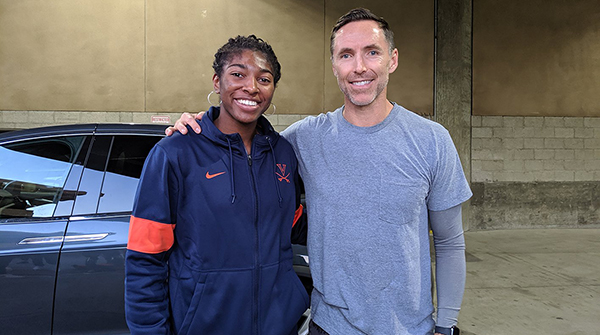 The Virginia women’s basketball team is out on a West Coast road trip, playing at USC and Cal State Northridge. After the USC game, the team ran into two-time NBA MVP Steve Nash, who chatted with the squad as they were leaving the Galen Center. In between practices and games, the team has also been taking in the sights, including a trip to the Santa Monica Pier. You can catch up with all of their adventures on their Instagram feed and stories.