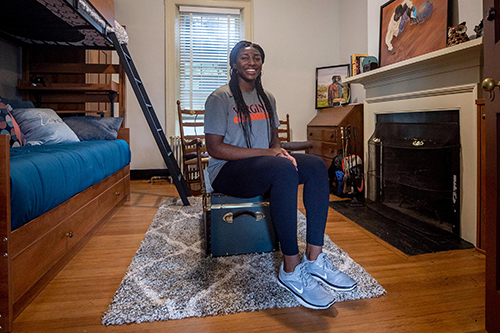 @UVAWBB All-ACC first teamer Jocelyn Willoughby added some new hardware to her collection on Wednesday, being named the Kay Yow Award winner, the name of the ACC women’s basketball scholar-athlete of the year award. UVA Today spoke with Willoughby about her top-five favorite things about being a student-athlete in this feature that was released moments after the announcement from the conference.

Former @UVAFootball player and two-time Super Bowl champion Chris Long has taken up podcasting after his retirement from the NFL. We have told you about several of those podcasts on this blog. If you have ignored those previous posts, do not ignore this one. Long has been teasing for weeks a podcast of epic proportions with his former Rams teammate William Hayes, and it has finally dropped! As an offshoot of the Conquering Kili project undertaken by his charity, The Waterboys, Long took people on a safari in Tanzania, mostly football players who, like Hayes, did not want to summit the towering Mount Kilimanjaro. In this audio-only podcast, Long and Hayes are casually discussing said mountain, lions and whether or not dinosaurs actually existed when they have some unexpected visitors to the interview. 8:40 mark. Fast forward to there if you don’t have time to listen to the whole interview, but trust me, you should make time for this one! (warning, there is some very NSFW language when said unexpected guest arrives)