From the basketball court to the tennis court … @dawnstaley and Mary Slaughter paved the way for women's athletics for @VirginiaSports and @theACC ⚔️ pic.twitter.com/AakemprTzw

Yesterday was the 48th anniversary of the signing of the Title IX legislation. There were a variety of tributes and panels to commemorate the anniversary, including a piece on the ACC Network that featured @UVAWomensSoccer alumna Anglea Hucles. The Women’s Sports Foundation hosted a panel discussion featuring @UVAWomensHoops alumna Dawn Staley. Staley was also profiled in the above tweet from the @ACCNetwork. 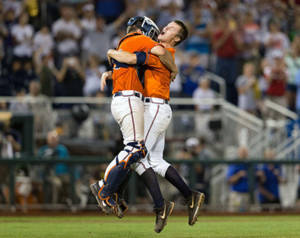 Today is another anniversary. Five years ago on June 24, the @UVABaseball team won the NCAA championship. Head coach Brian O’Connor was on the Packer and Durham show on the ACC Network. David Teel had this piece in the Richmond Times-Dispatch talking about the enduring bonds formed by the players on that team. The Daily Progress ran this piece looking back on the title run.