HOOS LIFE: Halle Graham From Starting Lineup to Surgery and Recovery at Home

Women’s lacrosse midfielder Halle Graham had made her way into the starting lineup for the Cavaliers in the Spring, but just before the pandemic hit she suffered a torn ACL. Having surgery on that Friday after sports were cancelled, her recovery had a very different look then normal. 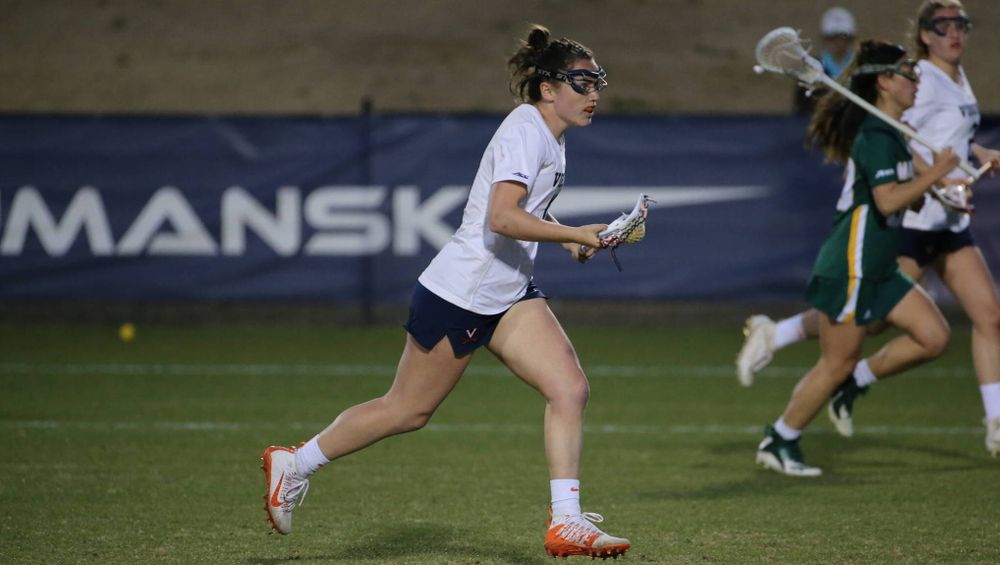 Q: This season you stepped into a bigger role on the team as one of the first subs, then into the starting lineup. What type of training did you put in during the offseason and fall to prepare for this past season?

Graham: “I worked on the areas of my game that I knew I needed to focus on. For me, that meant paying special attention to the offensive side of my game and working on gaining confidence on that side of the field.”

Q: Were there specific skills you worked on? Did you have someone that you worked with often to train?

Graham: “Shooting drills and dodging became a large part of my training because I knew that that was the part of my game I could really improve upon. Myla Barnett would often stay with me after practice to focus on passing and shooting on the move. In addition, I received a lot of great direction and feedback from the coaches that further helped me grow the offensive side of my game.”

Q: As a midfielder, you have to play both sides and run the field, how do you stay conditioned for that?

Graham: “I believe that the best way to stay in shape for the midfield position is to push yourself outside of the normal practice routine. Conditioning workouts I did involve changing my speed with a combination of running and sprinting. Setting aside even just twenty minutes for running a few times a week can be enough to get a challenging workout in.

Q: What do you enjoy about the midfield position?

Graham: “What I love about midfield is how much you can work with and learn from both sides of the field. Many times, on defense, we discuss concepts from the attackers’ point of view, and vice versa. Having both perspectives to tap into has been really beneficial in growing my game and field sense. I also really enjoy being on the circle for the draw. The draw is always mentioned as one of the most important aspects of the game.”

Q: What was the trip out to California like for the team? Was there something you enjoyed the most about the trip?

Graham: “The trip to California was very special to our team for many reasons. We were excited to play teams that we normally do not have the opportunity to play against. Facing new competition keeps the game really interesting. In addition, a handful of players on our team had never been to the west coast, so there was an added element of anticipation. I was fortunate enough to have my mother, two sisters, and cousin fly out to California to see the games. In fact, many players’ parents came to support us at the games, which was great to see, knowing we were so far from home.”

Q: You suffered a torn ACL in the Duke game, which ended up being the last game of the season, how did that next week play out for you?

Graham: “The next week, our team was really focused on making the adjustments from the Duke game to play against Syracuse that next Thursday. There were several doctors’ appointments I had to go to in preparation for surgery that I had scheduled for that upcoming Friday.”

Q: Had you ever had an injury like that before?

Graham: “No, I had not. I sustained two concussions during my time here at UVA, but neither of those injuries lasted more than a month.”

Q: That week when sports were cancelled, you had surgery on Friday, then you were able to stay for a bit to work with athletic trainer, Blair Moore. How did that go? What were you able to do with her while you were here?

Graham: “Though I wasn’t able to do many exercises, my time with Blair after the surgery was beneficial because we were able to discuss the plan that I needed to follow in order to fully recover.”

Q: What did you feel like with suffering such a major injury then a week later finding out sports were cancelled?

Graham: “When I found out that I had officially torn my ACL, I had to reevaluate my role on the team. I was actually in the doctor’s office when our team got the official word that our season was cancelled and we were unable to play Syracuse. Suddenly, there was another added element of shock due to the fact that my teammates could also not have the season that they conceptualized, and we couldn’t even be together for the remainder of the spring. Though everything had changed very suddenly, I have been very fortunate to have my family, teammates, coaching staff, and Blair supporting me through this process.”

Q: Once everything shutdown, the training became virtual. What was that like? Did you have daily sessions and what sort of exercises were you able to do?

Graham: “It was definitely strange not being present with a trainer once I went home, but Blair did such an amazing job to carve out time to facetime me every day to work on exercises. In the first couple weeks after my surgery, exercises were as simple as bending my knee. I remember when Blair told me we were going to start ‘thinking about’ doing a leg lift, I thought to myself ‘that’s crazy, of course I can do a leg lift!’ and sure enough, I couldn’t. That exercise took me about a month to do well, as did most of the other exercises. Blair helped reassure me that even though the day to day progression may seem insignificant, when I look back on my progress, I will be able to see substantial growth.”

Q: How much help did that give you once you went on to do physical therapy?

Graham: “The facetime calls with Blair were crucial to my recovery. Though I only started in-person physical therapy about three weeks ago, I was able to make a fairly seamless transition to other exercises due to Blair’s help.”

Q: With that being a fairly common injury in lacrosse, did you have anyone that you talked to as you have been recovering?

Graham: “Yes, everyone on the team and so many team parents, as well as all the coaches, reached out to support me over the last three and a half months. Taylor Regan, Annie Dyson, and Jamie Biskup all tore their ACL last year during the spring, and all have been really great to talk to as references during this process. I talked to Taylor about my initial worries being unable to do some exercises as soon as I would’ve liked. However, hearing her share that same experience with me and helping me trust the journey was very reassuring. Both my parents and my sister tore their ACL’s as well, so being surrounded by people who could relate to the challenges I was going through made the recovery easier.”