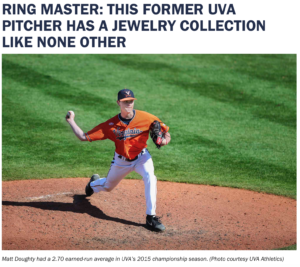 Matt Doughty was the feature of a UVAToday article today as the former UVA pitcher is the only former player to have a College World Series Championship ring and a Major League Baseball world championship ring. Doughty claimed the first ring as part of the Cavaliers’ 2015 NCAA Championship team and then received the second as a scout for the Washington Nationals last season.

New Team In The Angel City 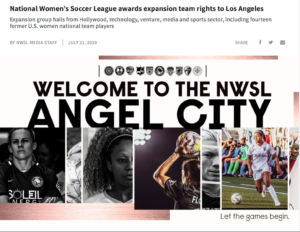 A pair of UVA women’s soccer alums are part of bringing a professional women’s soccer team back to Los Angeles. The National Women’s Soccer League announced expansion rights for the city and Angela Hucles and Amanda Cromwell are part of a consortium of former USWNT players, celebrities and businesswomen who worked to secure the opportunity for the league and the city. 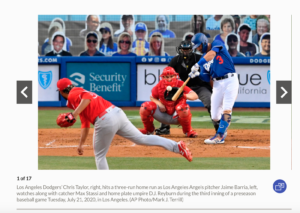 Professional baseball is returning to action in the United States and UVA alum Chris Taylor played a major part in the Dodgers’ win over the Angels in the final exhibition game for the two franchises. Taylor hit a three-run homer in the third inning to secure the victory for the Dodgers. You can read about the matchup here.