Sophomore Jada Seaman (Pikesville, Md.) repeated as the long jump champion, edging out teammate Khyasia Caldwell (Pocono Summit, Pa.) by a quarter of an inch, for the first-place medal. Those two performers took the top two places in the event at the 2020 ACC championship meet.

Both Seaman and Caldwell earned first-team All-ACC honors for their finishes. 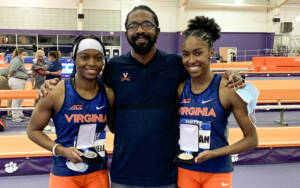 Junior Alix Still posted a personal-best score of 3,974 points in the pentathlon to finish third and earn first-team All-ACC accolades. Still’s score allowed her to move up to third on UVA’s all-time performance list. Still was sixth at the 2020 ACC championships and improved her score from that meet by 317 points.

In the 60-meter dash, senior Halle Hazzard (Commack, N.Y.) advanced to Saturday’s final along with freshman Kayla Bonnick (St. Catherine, Jamaica). Hazzard had the second best prelim time (7.28) while Bonnick was seventh with a personal best time of 7.48

They will also race in Saturday’s 200-meter finals along with Seaman.

The UVA men advanced two competitors to Saturday’s 400-meter finals. Jordan Willis (Williamsburg, Va.) turned in the fourth best performance at 47.00 while Brandon Outlaw (Moorestown, N.J.) was right behind him with the fifth-best clocking at 47.16. Outlaw and Willis rank first and third, respectively, on UVA’s all-time list for the 400 meters.

Andrenette Knight reached the finals in the women’s 400 meters. She had the fourth fastest time in the prelims, turning in a season-best effort of 54.99.

Director of Track & Field and Cross Country Vin Lananna on the Hoos
“This was a historic day for the Virginia women capped off by the one-two finish in the long jump and the third place by Alex Still in the pentathlon. The men were led by a gutsy performance in the heptathlon and two finalists in the 400. Tomorrow is a big day for our teams. I am very proud of the Hoos!”

Next Up
The final day of competition at the ACC Championships starts at 10:30 a.m. The meet will be streamed on ACC Network Extra.

Cavaliers to Compete at World Athletics U20 Championships
XC/Track

Cavaliers to Compete at World Athletics U20 Championships