The College Squash Association formally decided to cancel the 2020-2021 season in late 2020 after extensive discussion among the coaches and representatives from member institutions. “We were, to some degree, prepared for that outcome,” notes Head Coach Mark Allen. “Make no mistake, we were disappointed. But we also recognized that we were, if not the most fortunate, at least one of the most fortunate teams out there.”

Unlike the vast majority of CSA member programs, UVA maintained in-person learning for the entire year and the teams had full access and clearance to practice for the entirety of the season. And, according to Coach Allen, “we made real progress. I applaud our players for the way they balanced all the challenges we faced. With little or no official competition to look forward to, it would have been easy to lose motivation and focus. But I am very pleased with the level of effort our players showed–and I think we were all very grateful for the opportunity to be together at a time when the vast majority of our competitors were not. Without the physical strain of long match weekends, we had an opportunity to push the athletes for longer and harder in the weight room. And our S&C coach, Justin Russ, did just that. He really made sure the players capitalized on the time available. As a result, we ended the season stronger and fitter than we entered. This could very well pay dividends for us next season and beyond.”

The men’s team played just two matches, both against Navy in late February. The matches were among the only college contests to be played this season and UVA took both–winning the first 6-3 before taking a 9-0 win in the second round.

Will Holey, who was voted team captain for the 2021-2022 season, characterized the season as “a qualified success.” Holey notes that “things felt so uncertain at the start of the season. Nobody knew exactly what returning to grounds would look like–or if it would even last. But once it became clear that we could sustain practices and in-person learning with the right level of caution, we found a routine and a rhythm. From that point on, we were able to put our focus on improvement–of ourselves, our level of play, and our output as a team. I know we were all grateful to be practicing together and it was often the highlight of the day to be able to get out on court. Our match against Navy was a preview of what we were working for. It left all of us hungry for more and eager to get back to the real thing in the coming season.”

The women’s team was unable to schedule any matches, although they did play a series of highly competitive intrasquad scrimmages.

It was exactly this sort of internal competition that motivated improvement for both teams over the course of the season. According to incoming women’s team captains Caroline Baldwin and Emma Jinks, “As individual athletes and as a team, we have learned to make the best of the situation we’re given. It was a tough thing, especially for our seniors, to watch the winter go by without official competition. However, the diligence and commitment each and every player contributed–and continues to contribute–to this team made all the difference in our progress.  Despite the lack of CSA matches, the team was successful in maintaining our upward momentum by challenging each other in intrasquad matches and by always keeping our training environment positive.  We are so proud of the improvements this team has made in terms of our on court performance, as well as our off court friendships.  After a year spent overcoming the countless obstacles that COVID presented, we believe our team is stronger for it–and more united than ever before. And, without a doubt, we are all eager to prove it when we open the season next November.”

The College Squash Association is on track to resume competition in 2021-2022. And the Cavaliers are eager to test themselves against the nation’s best again.

UVA assistant coach Grant White calls the upcoming campaign “potentially the most historic in program history,” noting that “we have an extremely competitive schedule lined up, with Yale, Penn, Princeton, and Harvard all on the slate. And we are looking forward to measuring how much we’ve improved in these contests. It’s shaping up to be a great year for UVA and for college squash.” 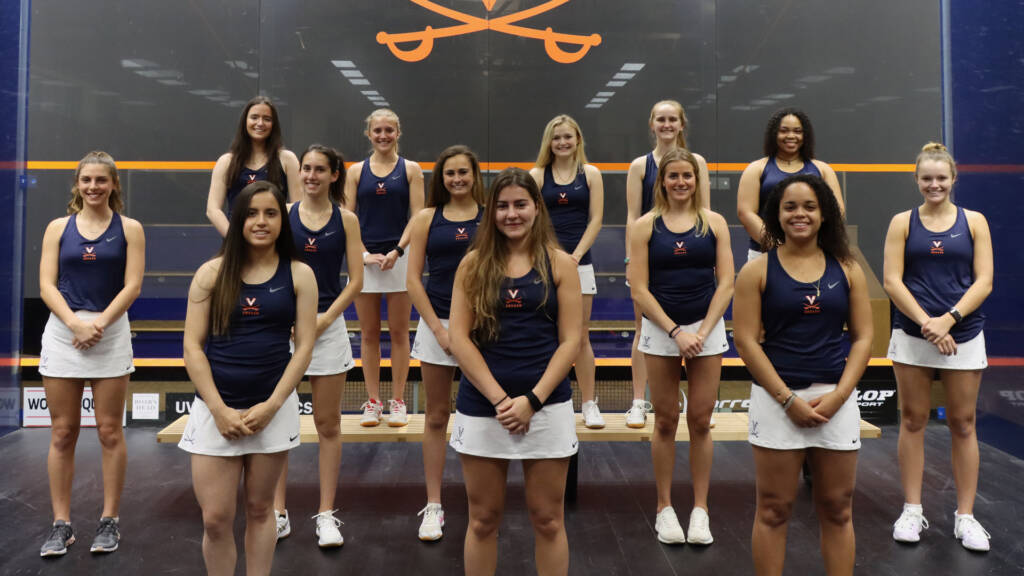 UVA Bids Farewell to Class of 2021