CHARLOTTESVILLE – Was Bar Botzer destined to be a Wahoo? Maybe so, but he followed a long and unconventional path to the University of Virginia, where he’s a first-year student in the Darden School of Business.

On the junior tennis circuit, Botzer competed against and became friends with such players as Thai-Son Kwiatkowski, Luca Corinteli, Mac Styslinger and Alexander Ritschard, all of whom would end up at UVA.

This was a decade ago. On his Facebook page, Botzer said, there’s a chat thread from 2011 in which Corinteli talks up the Cavaliers’ program.

“He’s like, ‘Dude, you’ve got to come to UVA. It’s a great team, it’s a great school,’ “ recalled Botzer, a native of Israel who grew up in Tel Aviv. “And I was like, ‘I’m going to go to the military. It’s not really applicable for me.’ It’s funny how things turned out. I started college when those guys were already done.”

Military service is compulsory for most Israelis, and after graduating from high school Botzer served in the Israel Defense Forces from November 2012 to November 2015. When he left the military, he still had aspirations to play tennis in the United States, and in the summer of 2017 he enrolled at Wake Forest as a 23-year-old freshman.

He made an immediate impact. In 2017-18, Botzer posted a 36-7 record in singles to help the Demon Deacons win the NCAA team title. In 2018-19, he advanced to the round of 16 in the NCAA singles tournament before withdrawing because of an injury, and in 2019-20, playing No. 1 singles for Wake, he was 18-8 when the COVID-19 pandemic struck the United States and college sports shut down.

Botzer, who had a 3.9 grade-point average, earned a bachelor’s degree in finance from Wake in December 2020. Knowing he would graduate midyear, he had opted out of playing in 2020-21 and, because of the COVID-19 waiver granted to student-athletes by the NCAA, had two seasons of eligibility left.

After being accepted at Darden, one of the nation’s most prestigious business schools, Botzer decided to use them at UVA, where he began a two-year MBA program last semester.

“It’s been going well,” Botzer said. “Darden’s definitely been tough, tougher than I think what we expected, me and the coaches and the team. But at the same time I think we’re done with the most difficult part, which is the first semester, and I think from around March things will calm down significantly. But I enjoy it a lot. I’ve got great classmates, great professors, school’s amazing. I’m very lucky to be where I am.”

The 6-foot-1 Botzer was a welcome addition a tennis program that advanced to the NCAA tournament’s round of 16 last season.

“In a lot of ways, I look at Bar as an extension of the coaching staff,” said Andres Pedroso, UVA’s director of tennis. “He’s been invaluable when it comes to sharing his experiences that he’s had in college tennis––the wins and the losses, the good times and the bad times––and he’s been great at communicating it with the guys.

“He’s also a very, very smart tennis player. And so he’s very good at reading the game and understanding people’s games, and I’ve learned that he’s a great communicator.”

The sixth-ranked Hoos will host the ITA Kickoff Weekend tournament Saturday and Sunday on the indoor courts at the Boar’s Head Resort. Botzer is 11-3 in 2021-22 but acknowledges his game is not where he wants it to be.

“I really want it to be in a specific place,” he said, “where it was when I was at Wake and felt really confident and won a lot of matches. So I really want it to be there as fast as possible, but the coaches give me full support and are trying to remind me [to be patient]. They know everything that I’ve gone through, being away from the game and having Darden take its toll on me in the fall way, way, way more than I thought it would. I worked really hard over winter break and I’m in a good place, bearing in mind everything else that’s going on, but definitely there’s a lot more room to grow. Luckily the season is long, and as long as I’m performing in April and May, that’s all I care about.”

Such rust is to be expected, Pedroso said.

“He didn’t play a competitive match for over a year, and for a tennis player that’s a long time,” Pedroso said. “And so it’s going to take him some time to find himself out there again. He’s been doing it little by little since he started here in September, and it’s a gradual process that he’s working through with the way he trains and the way he lives his life off the court, the way he thinks on the court. And if there’s one thing about Bar Botzer, it’s that he loves to compete.”

Over the years, many former UVA student-athletes have returned to Grounds to attend Darden. Botzer, however, is believed to the first student-athlete to compete for one of UVA’s varsity teams while enrolled at Darden.

“Now that we’ve experienced it, we have a true appreciation for how hard it is to juggle both, because Darden is so demanding,” Pedroso said. “It’s such an all-encompassing experience, that to combine that with being a student-athlete is a huge challenge.”

Botzer noted that “the programs are not designed to work with each other. It’s not like undergrad where you have constant communication between the school and the athletic department. So, it’s learning on the fly for me, for the coaches, for the school. I know the coaches are working really, really hard on making things work, especially now that the spring is coming up. I want to play in all the matches, I want to help the team, I want to be able to give back on the court with everything they’re giving me every single day, both coaches and teammates.” 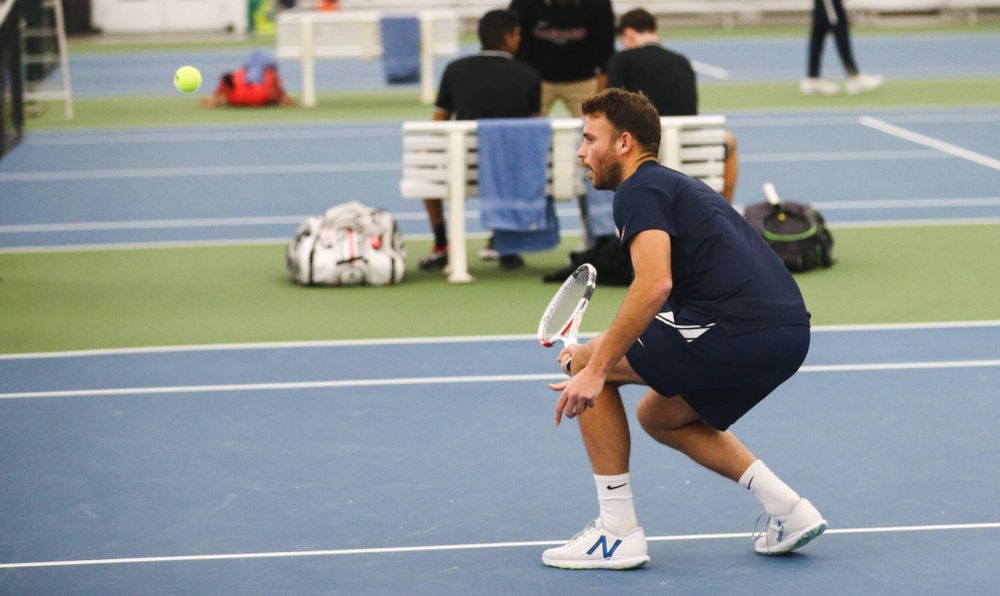 At Wake Forest, Pedroso said, Botzer “took very tough classes, took 18 credits every semester, so he was used to having his hands full, and the way he approached the whole process of communicating with me was so professional and so transparent. I felt that if there’s somebody that can do this, it’s Bar Botzer, and so far, especially this spring, he’s showing us that he can do it, and he’s going to get better and better at doing it, and Darden has done everything they can to support us. His professors have been great, and we appreciate that. It’s a team effort that’s creating a really unique and fantastic story about a student-athlete at Darden.”

Botzer wasn’t sure what to expect when he joined Pedroso’s program. For starters, he’ll turn 28 in March, “and I have teammates that are 18,” he said, “so there is a generation gap, for sure.”

It helped that while at Wake he’d competed against some of the players who are now upperclassmen at UVA, including Gianni Ross, Ryan Goetz and William Woodall.

“So I had some sort of familiarity with those guys, but just from an opponent’s [perspective],” Botzer said. “I didn’t really know them, and I was coming from a rival school. But since day one they’ve made it super smooth for me. All of the guys are really, really good people, and the coaches as well. It’s a tight group.”

The coaching staff has worked hard to accommodate Botzer’s obligations at Darden.

“I wouldn’t be able to sit here right now with a smile on my face without Andres and without the coaching staff,” Botzer said. “They have gone way, way above and beyond anything I could have imagined. They’ve worked with me since day one. They trust me. They give me confidence. They’re always with open ears and open mind to hear what’s going on with me and what I have to offer even for the team, and they’re giving me, I would say, I would say, a lot of freedom and a lot of trust.”

In addition to his military service, Botzer’s résumé includes several internships that helped prepare him for Darden, where his classmates include veterans of the U.S. armed forces.

Botzer looks back on his experience in the Israel military as “a little bit of a love-hate relationship.” Some Israelis try to get out their commitments, but Botzer never considered that option.

“It’s a duty of mine as an Israeli citizen,” he said. “We all do it. All my family members have done it, all my siblings, parents, grandparents. But I’m not going to lie. It was hard to be in basic training somewhere while people that I was competing with in juniors, they’re practicing and they’re traveling and they’re playing tournaments and they’re completely free to do whatever they want. It was hard to not to live my life as my friends from across the world were living theirs.

“So it definitely held back my tennis career, but I think it gave me a lot as a person. Also, when it comes to getting an MBA, I don’t think I would have gotten into Darden without my military service. So looking back at it, I’m extremely happy that I made that decision, and it opens a lot of doors for me today.”

His three years in the Israel Defense Forces taught him how to confront adversity and deal with situations where “things are not going the way you want them to go and there’s not a whole lot you can do about it, but you still have to get your work done,” Botzer said.

His military experience also helped him “gain perspective on life,” Botzer said. “We can get really upset for losing a tennis match or getting broken in the final set, but there are things that are way more important in life.”

He expects 2022-23 to be his final season of competitive tennis “unless Coach Pedroso gets me another year [of eligibility] somehow so I can get a Ph.D,” Botzer said, smiling.

“I’ll be 29. I’ll have a top MBA degree under my belt, and Darden opens a lot of doors. I’m currently interviewing for a summer internship, and I’m going to try an interview next year to get a full-time job. Again, I’m extremely lucky to be a part of this school. The best companies in the world come to recruit on campus and want the talent that Darden has to offer. I’m looking at my classmates, and they’re all really, really, really impressive. Sometimes I’m asking myself, ‘How did I get here?’ I’m just super lucky to be here.” 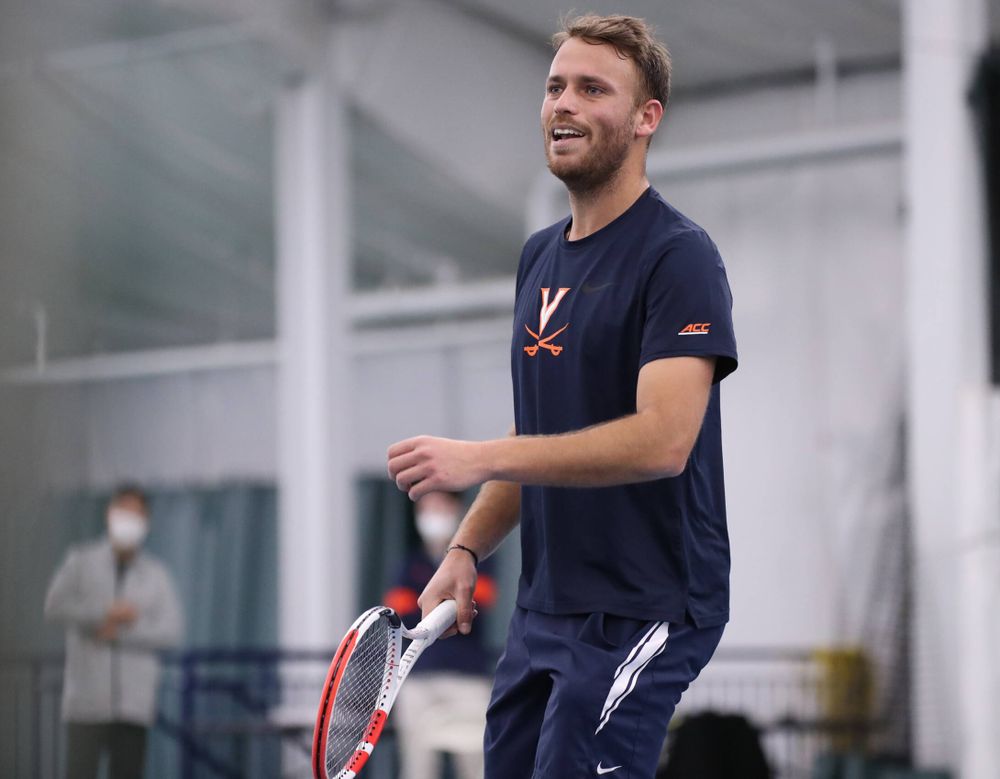