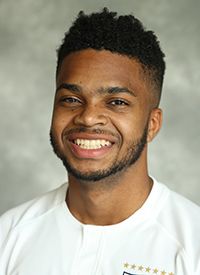 2019
• Appeared in 11 games and made four starts (Duke, Radford, Louisville & Boston College)
• Played all 90 minutes in back-to-back matches, at No. 2 Duke (Sept. 13) and home against Radford (Sept. 17)
• Logged 90 minutes in a double-overtime draw against Boston College, his first collegiate match in his home state of Massachusetts

2018
• Appeared in six games off the bench, including the last three of the season
• Played a season-high, 47 minutes in NCAA Tournament game against Notre Dame (Nov. 25)

PERSONAL
• Parents are David and Lara James
• Has one older brother, Davis, and one younger brother, Sam
• Was born in Boston but moved to Washington, D.C., at age of five and moved back to Massachusetts nine years later