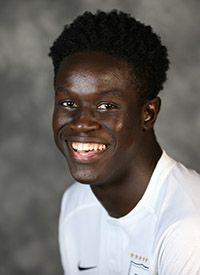 2018
• Signed a homegrown contract with the Columbus Crew SC (MLS)
• Named to TopDrawerSoccer.com Freshman Best XI Second Team
• One of four Cavalier freshman to be listed on ACC All-Freshman Team
• Played all but one minute of 17 games (1,599 minutes total)
• Scored his first collegiate goal at Pitt on Sept. 28 on a header to put UVA up 2-0
• Named to TopDrawerSoccer.com Team of the Week on 10/2 after scoring his first career goal on 9/28 at Pitt and helping UVA to its fourth-straight shutout
• Rated the No. 1 freshman on TopDrawerSoccer.com’s midseason report
• Integral part of a Cavalier back line that produced nine shutouts (17th most in NCAA) and sported a 0.675 goals against average (13th lowest in NCAA)