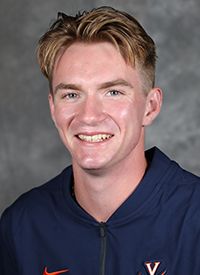 2019-20 Indoor
• ACC runner-up in the mile, earning All-ACC honors in the event
• Ran a time of 4:02.39 at the ACC Championships
• Ran a sub-four-minute mile at the David Hemery Valentine Invitational
• Captured a career-best time of 3:59.38, third-fastest time in program history
• Competed with the 4x400m relay at the ACC Championships
• Won the mile at the Navy Invitational
• Finished first in the DMR at the Virginia Tech Invitational

2019 Cross Country
• Earned USTFCCCA All-Southeast Region honors
• Named to the All-ACC team
• Placed 11th at the NCAA Southeast Regional Championships, leading the Cavaliers at the meet
• Finished 20th at the conference championships and was the second UVA runner to finish the race
• Was the fourth UVA runner to cross the finish line at the NCAA Cross Country Championships, recording a 10k time of 30:17.8
• Finished in the top 20 at four races
• Led Virginia at the Nuttycombe Wisconsin Invitational

2018 Cross Country
• Earned All-Southeast Region honors, finishing 13th which was the second-fastest time for the Cavaliers at the meet
• Ran a time of 30:21.2 at the NCAA Southeast Regional Championships
• Finished 35th at the ACC Championships and finishing as the team’s fourth runner at the meet
• Captured a top-10 finish at the Penn State National Open, placing eighth overall
• Named to the All-ACC Academic Team

2018 Outdoor
• Did not compete
• Named to the ACC Honor Roll

Background
• Son of Ellen and Andy Ernst
• Has a younger sister, Emily