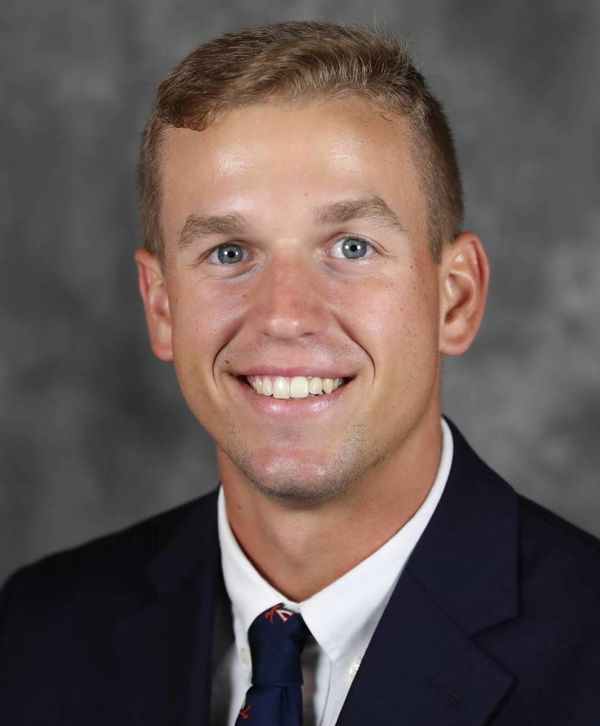 2019-20 (Senior)
• Named to PING All-East Region Team
• Only player to participate in all seven events before season suspended
• Led UVA with career-best 71.48 stroke average
• Was team’s top finisher in four of six team-scoring tournaments
• Had six top-15 finishes during the season
• Top outing was runner-up performance at Georgia Southern Individual Collegiate where he shot -5, 211
• Spring stroke average was 70.67 in three tournaments
• Named to 2020 ACC Honor Roll

2018-19 – (Junior)
• Named to PING All-East Region Team
• Second on the team with a 71.70 stroke average
• Played in all 11 tournaments
• Was one of three players on roster to post season-best -10, 206 in tournament play.
• Posted his career low tourney score (206) at Clemson Invitational where it tied for seventh
• Led or tied for UVA scoring lead in three tournaments – John Burns Intercollegiate, Hootie at Bulls Bay and Clemson Invitational
•Was ninth at John Burns Intercollegiate in other top-10 finish during the season
• Named to 2019 ACC Honor Roll
• Selected to the ACC All-Academic team
• Named to VaSID All-State team

2017-18 (Sophomore)
• Played in 11 of team’s 12 tournaments
• Finished the season with a 73.47 stroke average
• Led UVA with runner-up performance at the Hackler Championship
•Matched his career-best score by shooting -5, 211 at Hackler
•Fired career best 7-under 65 during final round of Hackler to tie for low round of season on the team
•Was seventh at John Burns Intercollegiate at -4, 212

2016-17 (Freshman)
• Played in seven tournaments, six as a scoring player
• Was UVA’s designated alternate for NCAA Championships
• Placed 10th at John Burns Intercollegiate with season-best performance of 5-under, 211
• Was 12th at Hootie @Bulls Bay as an individual (-2, 214)

High School/Junior Golf / Personal
• Majoring in commerce at UVA
• Participated in 2018 and 2019 U.S. Amateur Championships
• Listed as a member of the class of 2017, he graduated from high school a year early to enroll at UVA
• When he signed with UVA he was ranked the nation’s No. 10 junior by Golfweek and the No. 19 golfer in the American Junior Golf Association’s standings
• According to the AJGA standings, he was the fourth highest-ranked college bound player for 2016
• Named a 2015 Rolex Junior Golf second-team All-American
• Was the runner-up at the 2015 U.S. Junior Amateur Championship
• Placed seventh at the 2014 Jones Cup Junior Invitational
• Also posted a top-10 finish at the 2015 FootJoy Invitational
• Runner up in the South Carolina AAA championship in 2013
• Recipient of the Jim Copeland endowed scholarship for the 2020-21 academic year