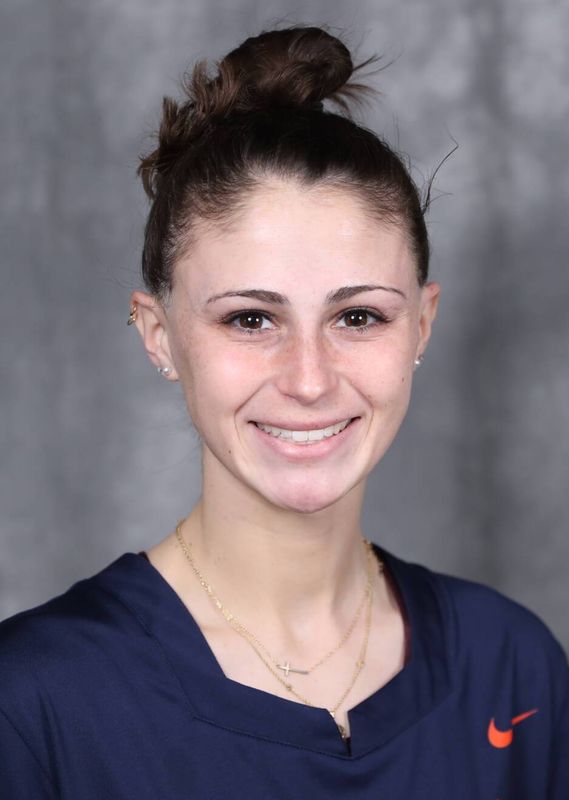 2021
• Started all 16 games in the cage for the Pirates
• Named ECU Newcomer of the Year
• Finished the year with 134 saves on 458 shots faced, recording a save percentage of .387 and a goals against average of 14.44
• Her 134 saves ranked third in the AAC and 25th in the NCAA
• Also in the top 80 in the nation in goals against average (79th) and save percentage (75th)
• Started the season with 10 saves in a season-opening win over Furman (2/12)
• Set a new career-high with 15 stops against Vanderbilt (3/26)
• Had double-digit saves on eight occasions, making 12 stops against Jacksonville (3/6) and in the second game against the Commodores (3/28
• Tied for the team lead with 29 ground balls while also causing one turnover
• Named to the AAC All-Academic Team.

2020
• Started all eight games in the cage before the season was ended due to the Covid-19 Pandemic
• Was named the AAC Defensive Player of the Week on Feb. 24 after making nine saves in ECU’s 12-11 win over Campbell (Feb. 22), the last a stop on a Campbell free-position shot in the final minute
• Made nine stops in ECU’s win over Presbyterian (Feb. 9) to earn her first collegiate victory
• Named to the AAC Weekly Honor roll after making six stops and earning the win against Wofford (Feb. 15)
• Recorded nine stops in back-to-back games, first against Campbell and again against Longwood (Feb. 26)
• Recorded six saves in ECU’s win against VCU (March 1) for her fifth victory of the season, tying the ECU single-season record
• Stopped a career-high 13 shots against Army (March 7)
• Along with her shot-stopping abilities, also finished the year with 13 ground balls and one caused turnover
• Named to the AAC All-Academic Team.

High School
• Lettered for three years at Shawnee High School under head coach Julie McGrory
• Set the Shawnee career saves record with 557 stops
• Team captain senior year
• Named First-Team All-South Jersey as well as the South Jersey Goalie of the Year in 2018 and 2019
• Led the conference in saves during her sophomore, junior and senior campaigns while leading the South Jersey Group 4 in stops and save percentage during the latter two seasons
• Was a 2019 US Lacrosse All-American as well as Second-Team All-Conference and Second-Team NJ All-Group 4
• Played in the NJ North vs. South Senior All-Star Game
• Was First-Team All-South Jersey, First-Team All-Burlington County, First-Team All-Courier Post, Third-Team NJ All-Group 4 and an Academic All-American in 2018
• Named one of the sophomores of the year on NJ.com and to the Schoolgirls National Tournament New Jersey Team 1 in 2017
• Appeared in one game as a freshman, helping the Renegades finish as the Olympic Conference and South Jersey Group 4 Champions and the New Jersey Group 4 finalists.