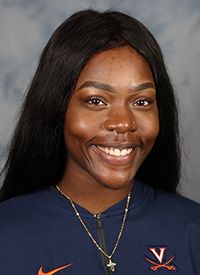 2019 Outdoor
• Advanced to the NCAA East Preliminary Rounds in the shot put, finishing 22nd overall
• Earned All-ACC honors with a third place finish at the ACC championships
• Recorded a mark of 16.00m (52’6″) in the shot put at the ACC Championships, in addition to throwing 43.49m in the discus at the meet for a 14th-place finish
• Captured the second-best throw in school history in UVA’s quad meet against Maryland, Pitt and West Virginia
• Recorded a career-best discus throw of 46.67m (153’1″) at the Virginia Grand Prix
• Named to the USTFCCCA All-Academic Team
• Recognized to the ACC Academic Honor Roll

Personal
• Majoring in public policy and leadership
• Daughter of Harold and Verona Jones
• Has a brother, Emmanuel, and a sister, Adrian