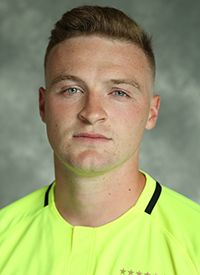 PRIOR TO VIRGINIA
• Graduate transfer from Binghamton University
• Appeared in 29 games including 25 starts and four shutouts in three seasons for the Bearcats
• Held a career goals against average of 1.40 with three solo shutouts
• Credited with 100 career saves, including a career-high 54 his in 2018
• Member of the America East Commissioner’s Honor Roll, the BU Athletics Director’s Honor Roll and was on the Watson School of Engineering School Dean’s Honors List
• Named the America East Defensive Player of the Week on Sept. 10, 2018
• Made a career-high 10 saves against American on Sept. 11 against American

PERSONAL
• Born in Fairfax, Va.
• Parents are Brian and Elizabeth Shutler
• Both of his parents are UVA alums
• His younger brother Colin is also a member of the UVA soccer team