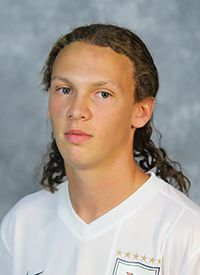 2018
• Appeared in six games off the bench
• Played a season-high 34 minutes against FIU on Sept. 18
• Registered shots against Marshall (Sept. 11) and Radford (Oct. 16)
• Listed on the ACC Academic Honor Roll

2017
• Appeared in 12 games off the bench
• Scored his first career goal on Aug. 31 against Hofstra
• Logged a season-high 54 minutes in a 2-2 tie against Syracuse on Sept. 8
• Saw action in the first seven matches of the season
• Listed on the ACC Academic Honor Roll

2016
• Appeared in 16 of 20 games for the Cavaliers this season, starting nine matches
• Led the team in assists with four
• Recorded first point of his career against Xavier (9/2), assisting on the Cavaliers’ lone goal
• Tallied his first multi-point game against VCU (9/14), assisting on two of the Cavaliers’ three goals that night
• Listed on the ACC Academic Honor Roll

2015
• Played in one match during freshman season, coming off bench and playing 13 minutes in UVA midfield against Portland (10/5)
• Named to ACC Academic Honor Roll

PREP
• Played for B93 U-19, one of top youth academies in Copenhagen
• Earned full scholarship at FC Copenhagen School of Excellence from 2009-12 and was member of the academy squad from U-14 to U-17
• Part of Israel’s National Youth Team setup for U-16 and U-17 teams
• Played in international tournaments and won against academies from Bayern Munich, Lyon, Blackburn, New York Red Bulls, Malmö and Qatar