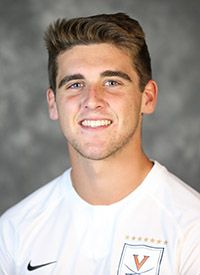 2019
• Signed a professional contract with Atlanta United 2 (USL) in January of 2020
• Listed ono the NCAA College Cup All-Tournament team
• Started all 22 games in which he appeared
• Was fifth on the team with 13 points (3g, 7a)
• His seven assists were tied for the eighth most in the ACC
• Six of his seven assists were on game-winning goals, tied for the sixth most in a single-season by a UVA soccer player
• Between the ACC and NCAA Tournaments, was credited with a goal and five assists
• Scored a game-tying goal in the National Title game against Georgetown
• Produced game-winning goals against High Point (Sept. 7) and Radford (Sept. 17)

2018
• Named to the ACC All-Freshman Team
• Appeared in 15 games with six starts
• Scored two goals on the season, both came in a three-game span
• Tallied his first collegiate goal in road win against Clemson (Oct. 12)
• Scored the go-ahead goal against then-No. 1 Wake Forest on a bicycle kick
• Was second on the team with 27 shots, nine went on target