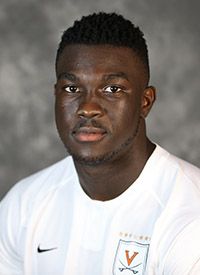 2019
• Drafted fifth overall by Orlando City SC in the 2020 MLS SuperDraft
• Prior to the draft, signed a Generation Adidas deal
• Named Third Team All-American by United Soccer Coaches, College Soccer News and Soccer America
• Listed on the TopDrawerSoccer.com Best XI Second Team
• First Team United Soccer Coaches All-South Region selection
• A Second Team All-ACC honoree
• Named the NCAA College Cup’s Most Outstanding Offensive Player after scoring three goals in two games
• Led the Cavaliers with 28 points (10g, 8a)
• His 10 goals were tied for the seventh most in the ACC and he was the first Cavalier double-digit goal scorer since 2012.
• Tied for 5th in the ACC in assists with eight, the most by a Cavalier since 2014
• Drew fouls that directly led to seven Cavalier goals, making him a part of 25 of the Cavaliers 45 tallies (55%) on the season
• Put forth multi-goal efforts against Saint Louis on Oct. 22 and Wake Forest on Dec. 13 (NCAA Semifinal)
• His game-winner against Louisville was the fastest goal by a Cavalier in 2019, just 1:01 into the match
• Named ACC Offensive Player of the Week on Oct. 28 after a total of three goals in games against Saint Louis and Virginia Tech
• Was an honorable mention on TopDrawerSoccer.com’s Team of the Week three times (Sept. 30, Oct. 7, Oct. 28) and was part of the team on Dec. 10

2018
• Listed on the ACC All-Freshman Team
• Started 12 of the 13 games in which he appeared (sat out four games due to injury)
• Co-led the team with five goals and tied for second on the club with 11 points (5g, 1 a)
• Scored two goals, including the game-winner against No. 5 Denver on Oct. 8
• Named the ACC co-Offensive Player of the Week on Oct. 15 after notching three goals in two games
• His first career goal, a game-winner, came against Wright State (Oct. 2)
• In a stretch of five games beginning on Oct. 2, against Wright State, scored five goals
• His lone assist on the year was on Nathaniel Crofts’ game-winner against Furman (Nov. 18) in the Second Round of the NCAA Tournament
• Member of the ACC Academic Honor Roll

PREP
• Served as the Edmond North team captain since his sophomore season
• Named the Oklahoma Gatorade Player of the Year in 2018
• A three-time Oklahoma Offensive Player of the Year
• Four-time All-City, All-District and team MVP
• Scored 70 career goals in high school, the Oklahoma 6A state record
• Helped his team win a state championship during his sophomore campaign
• Graduated in the top 5% of his high school class of 650 students

PERSONAL
• Son of Vincent and Jacinta Dike
• Youngest of five siblings
• His brother Bright played at Notre Dame from 2005-09. He totaled 66 career points (27g, 12a) and was named the 2009 Big East Player of the Year. He was later selected in the 1st round of 2010 MLS SuperDraft by the Columbus Crew, played for Portland Timbers and also earned two caps on the Nigerian National Team.