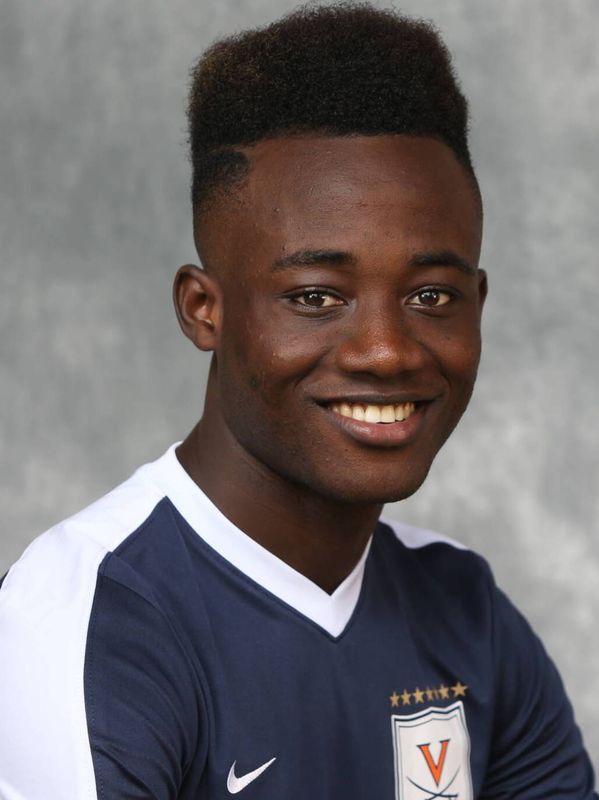 Career
• Scored 16 goals and tallied 41 points in 56 games as a Cavalier
• Signed a Generation Adidas contract prior to the 2018 MLS SuperDraft, the first UVA soccer player since 1999.

2017
• Drafted in the second round (32nd overall) by the Columbus Crew in the 2018 MLS SuperDraft
• A United Soccer Coaches Second Team All-South Region selection
• Earned Second Team All-ACC honors
• Named the ACC Player of the Week on Sept. 18 after scoring twice against Virginia Tech on Sept. 15
• Led the team in goals (8) and points (20) while tying for the team lead with a career-high assists (4)
• Started all 20 games in which he appeared
• Scored five goals in the first five games of the season
• Tallied a golden goal in overtime against Portland on Oct. 2
• Scored the go-ahead goal in the second half against Lehigh on Oct. 10

2015
• Named Third-Team All-ACC and to ACC All-Freshman Team
• Named to ACC Academic Honor Roll
• Played in all 18 matches, starting 15 at forward (with most coming atop UVA’s 4-2-3-1 formation)
• Scored UVA’s first goal and assisted on Wesley Wade’s game winner against Pitt (10/16)
• Scored his first college goal in win over Portland (10/5)

PREP
• Set Millbrook School records with 85 goals and 115 points
• Rated No. 34 prospect in 2015 class by College Soccer News and No. 147 by Top Drawer Soccer
• Named Co-MVP at 2014 High School All-America Soccer Game after scoring game-winning goal
• Was Western New England Prep School All-Select honoree each of his four years
• Came to United States from Ghana at age 15 through Right to Dream program