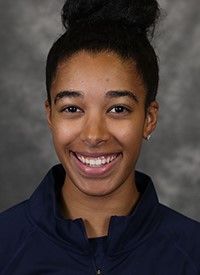 Personal
• Daughter of Paul and Melanie Gobourne
• Has one younger brother, Hill
• Born in Washington, D.C.
• Has been fostering abandond puppies with her family for three years
• Was a volunteer coxswain for DC Strokes and Athletes Without Limits (AWL)
• Alter server at her church for nine years
• Member and financial secretary of Jack and Jill of America, an African-American mothers group with children ages 2-19.