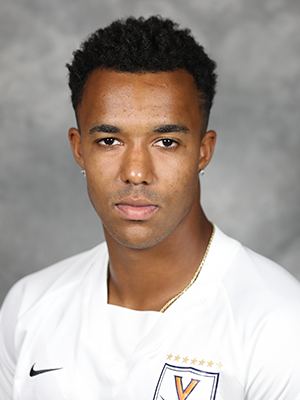 2020
• Played in the first 13 games of the season, making 10 starts
• His two assists were tied for the second most on the team
• Assisted on the season’s first goal against Louisville on Oct. 9, his first collegiate point
• Was on the field for every minute in seven matches, including the final five of the fall season
• Assisted on the first goal in a 3-2 OT loss to Pitt on Oct. 18

PERSONAL
• A Foreign Affairs major with a minor in Entrepreneurship
• Born in Montgomery, Ala.
• Son of Howard Byrd and Candace Lee-Byrd
• Father (Howard) played basketball at VMI
• Proficient musically with the violin, piano and saxophone