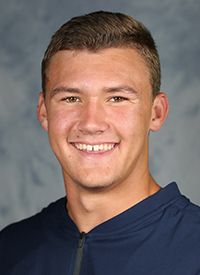 Background
• Set a discus record for the state of Florida, recording a mark of 63.86m (209’6.25″)
• Named the Florida Gatorade Player of the Year for boys track and field, the 2018-19 Lee County News Press Track and Field Athlete of the Year and the Florida USATF Men’s Thrower of the Year
• Competed at the U20 USATF Championships, finishing fourth in the discus 56.73m (186’01”)
• Second-ranked discus thrower in the class of 2019
• Named a New Balance Outdoor All-American in 2018 and 2019
• Won the Lee County Athletic Conference, district championships, regional championships and the 3A Florida High School Athletic Association State Championships in the discus, in addition to finishing the regular high school season undefeated in the event
• Captured the 3A Florida High School Athletic Association State Championships title in the shot put
• Won the Pepsi Relays and the Florida State Relays in the discus and shot put
• Set a Fort Myers High School record in the discus, throwing a mark of 199-feet, as well as in the shot put with a mark of 59-feet and hammer throw with a mark of 201-feet, six-inches
• Named the 2017-18 Distinguished Thrower for Fort Myers

Personal
• Undeclared
• Son of Christine and John Lemmon
• Has one brother, Michael, and one sister, Julia
• Father, John, rowed at Purdue