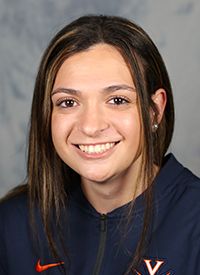 2019 Outdoor
• Finished 16th at the ACC Championships, throwing a mark of 37.03m (121’6″) in the javelin
• Captured a season-best throw of 40.35m (132’4″) at the Virginia Challenge
• Placed second at the William & Mary Triangular in the javelin
• Placed fifth in the javelin against Maryland, Pitt and West Virginia
• Recognized to the ACC Academic Honor Roll

2018 Outdoor
• Placed ninth in the javelin at the ACC Championships
• Threw a season-best throw of 41.21m (135’2″) at the Virginia Quad meet
• Recognized to the ACC Academic Honor Roll

Background
• Ranked 26th nationally for the class of 2017 and second in the state of New Jersey
• Recognized as the Northern Valley Demarest Female Athlete of the Year
• Named New Jersey State Sectional Javelin Champion 2014, 2015, 2016 and 2017
• Ranked second in the state of New Jersey for track
• Holds the 2017 country relay javelin record
• Earned third place at Penn Relays Carnival in track
• Named to first-team all-county
• Recognized as a four-time scholar-athlete
• Lettered in tennis and basketball as well

Personal
• Majoring in commerce and minoring in entrepreneurship
• Daughter of Larry and Janna Geller
• Has a brother, Blake
• Was a weekly volunteer at Englewood Hospital and Medical Center