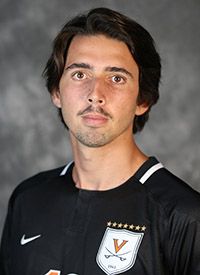 2018
• Appeared in two games, totaling 189 minutes in goal
• Took over for the injured Colin Shutler and started both NCAA Tournament games (Furman & Notre Dame)
• Recorded a shutout, making four saves against Furman in the Second Round of the NCAA Tournament

PRIOR TO VIRGINIA
• Transfer from the University of Tulsa
• Appeared in 11 games with three starts in two seasons (Took a redshirt in 2016)
• Made 37 saves and recorded three shutouts while and posted a 1.73 GAA

PREP
• Played club soccer for the US Soccer Development Academy team Shattuck St. Mary’s
• Was the first junior goalkeeper to make the Shattuck St. Mary’s U18 academy team
• Joined the U18 team for national finals week and was a national finalist when he was just 16 years old
• His team attended two consecutive finals weeks (2013, 2014) in the USSDA, the only non-Major League Soccer club to do so
• Was ranked in the Top Drawer Soccer and College Soccer News top 150 for the 2015 class, and was the 11th-ranked goalkeeper overall and first in the Midwest
• Tallied an 8-0-3 mark as a starter with five shutouts and a .633 goals-against average with the U18 team