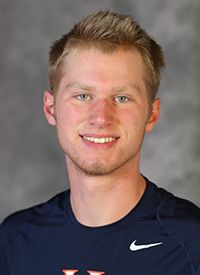 2018-19
• Finished 29th in the CSA Individual Player rankings
• Advanced to the semifinals at the CSA Individual Championships, falling in a five-game match
• Recorded an 11-10 overall record
• Went 9-9 at the top of the UVA ladder, playing as the team’s No. 1 all season
• Recorded wins against No. 8 Princeton, No. 12 George Washington, No. 16/17 Franklin and Marshall and No. 19 Williams

Background
• Named  the 2016 U.S. National Junior U17 Boys Champion and was a 2016 and 2017 U.S. Squash All-American selection
• Earned 2016 All-Independent School League selection and 2015 team honorable mentions selection
• Aided Nobel and Greenough School to an undefeated season and a ISL championship
• Ranked No. 1 nationally in the U15 and U17 levels
• Named a 2017-18 Unanimous All-ISL honoree
• Competed at the 2017 Junior Pan American Games with the U.S. national team, earning a bronze team medal

Personal
• Son of Michael and Rosemary McElroy
• Has one brother, Will, and one sister, Katherine
• Sister, Katherine plays soccer at Michigan
• Father, Michael, played basketball for MIT
• Englich major