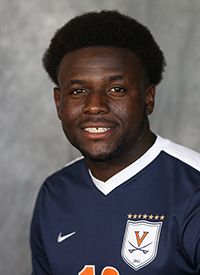 2018
• Played and started in all 17 games
• Logged 1,538 minutes, fifth-most on the team
• Was on the field for all but two minutes for the first seven games of the season, a stretch that included six shutouts and only one goal allowed
• Finished the year playing full time in the last seven games
• Attempted a total of 19 shots including a season-high four against Radford on Oct. 16
• Invited to the 2019 MLS Combine
• Named a top prospect by PDL, one of 12 defenders nationally

2017
• Started all but one game in his first year with the Cavaliers
• Assisted on the first goal of a 2-1 victory against Pittsburgh on Oct. 20
• Played full time in 13 contests including each of the seven games of the year (three double overtime games in that span)
• Tallied 13 shots on the season including a season-high three in games against Villanova (8/25) and Pittsburgh (11/20)

PREP
• Played at the Loomis Chaffee School in Windsor, Connecticut
• A High School All-American his senior year
• Helped lead his team to its first undefeated team in school history in 2014
• Named to the 2014 WNEPSSA Select All-Star team
• A 2014 NSCAA All-State selection for Prep L schools
• Led his club team, Connecticut Football Club, to a state cup championship in 2013

PERSONAL
• Comes from a family of seven with two brothers and two sisters
• Came to the U.S. after being identified by the MTN Football Scholars program which uses soccer to promote social change and gives opportunities for the top student-athletes in Nigeria to earn an education at American prep schools and universities