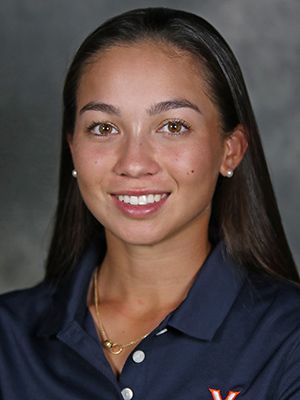 Junior / Amateur Golf/Personal
• Won the 2021 Massachusetts Women’s Stroke Play Championship, the first teenager to do so since former Hoo Brittany Altomare did it in 2005
• Finished sixth in stroke play at Women’s Western Amateur to reach match play
• Enrolled in the College of Arts & Sciences
• Picked up a win at the 2019 Sea Pines Junior Heritage
• Qualified for the 2019 U.S. Women’s Amateur Four-Ball Championship and the 2019 Girls Junior PGA Championship
• On the 2019 AJGA circuit, she had top-25 finishes at the Scott Robertson Memorial and the Hunter Mahan Junior Championship
• Was 19th at the Harder Hall Invitational and 17th at the South Atlantic Amateur
• Was Boston Globe All-Scholastic team in both 2018 and 2019
Eastern Independent League MVP in 2019 while competing for Beaver Country Day
• Won the 2018 Massachusetts Girls’ Junior Amateur
• Placed first in stroke play competition at the 2018 U.S. Challenge Cup Francis Ouimet Junior
• Had top-10 finishes at the AJGA’s UHY LLP CPA’s Junior and the Killington Junior
Won the 2017 Pepsi Little People’s Championship
• Participated in the AJGA Leadership Links program and raised money through direct donations or ones based on scoring birdies or eagles during tournament play
• Her efforts (over $20,000) have supported The B Fund, a non-profit based in Massachusetts that assists families with critically ill children
• Was recognized as an honorable mention selection to the USGA-AJGA Presidents’ Leadership Award for players who displayed selfless effort and commitment to helping others through volunteer work and fundraising efforts
• Trained at Gary Gilchrist Golf Academy
• Parents are Jennifer and Michael
• Has a younger sister, Samantha who is a snow boarder