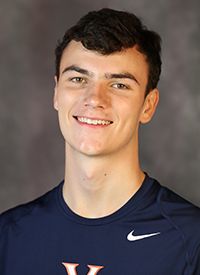 2021-22
• Team Captain
• Won his season-opener at Navy in three games while playing at the No. 8 position (11/10)
• Tallied a record of 9-9 for the Cavaliers
• Went 6-2 against MASC opponents
• Won two of his three matches at the Mid-Atlantic Squash Championships
• Notched Virginia’s first-ever point against Harvard defeating Tate Harms in five games at the CSA Championships

2019-20
• Recorded an 11-8 record
• Captured Virginia’s second point in the team’s come-from-behind win against Yale at the Potter Cup
• Went undefeated at the Mid-Atlantic Squash Championships playing at the No. 3 position
• Competed as the team’s No. 5 during the Potter Cup
• Named to the ACC Academic Honor Roll

2018-19
• Competed at the CSA Individual Championships, advancing to the quarterfinals
• Finished the year with a 6-16 record, playing in the top four of the Cavalier ladder
• Recorded wins for UVA against No. 18 Middlebury and No. 19 Williams

Personal
• Son of Brett and Susan Holey
• Has one brother, Luke, and one sister Blair
• Mother, Susan, played field hockey and lacrosse at Tufts