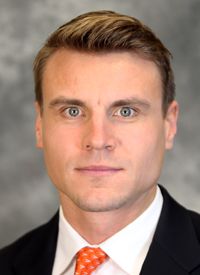 Ole Keusgen joined the staff in 2015 as an assistant coach, focusing on the Cavalier defense. He was promoted to Associate Head Coach in May of 2021.

In addition to serving as an assistant coach for the Cavaliers, Keusgen has been a coach with USA Field Hockey junior high performance for the last four years. He was the head coach U-19 Women’s National Team in 2019 after serving as a coach for the program and a mentor for the Junior High Performance program in 2017. He has also served as the head coach of the US Rise National Team, the de-facto U-19 junior national team.

Keusgen has been playing field hockey since the age of six, including playing professionally in Germany with one of the most successful field hockey clubs in European history, Uhlenhorst Mülheim, winning the German Indoor championship in 2015 and the Euro Indoor Club Cup in 2015. Keusgen also competed with the German National Team, winning a bronze medal at the 2013 World University Games in Kazan.

In addition to playing hockey, Keusgen has also spent the last 10 years coaching the sport, coaching both the men’s and women’s first teams of Oberhausener THC. Keusgen graduated with a bachelor of science in sport science with a focus on training and health from Ruhr University Bochum in Germany.