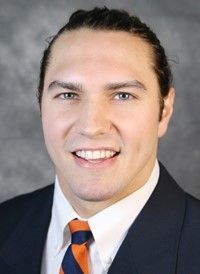 C.J. Stalker is in his fourth season at Virginia and third as a football analyst. He spent his first season on staff in 2019 as a defensive graduate assistant.

Stalker is a three-year letterwinner at Virginia who appeared in 20 career games for the Cavaliers. He made a career-high three tackles in the 2017 Military Bowl.

Stalker collected 13 career tackles with a season-best eight in 2017. He spent all of the 2018 season on headset assisting by calling defensive plays in.

Stalker, a native of West Chester, Ohio, is a 2018 graduate of Virginia with a degree in foreign affairs. Stalker also earned a masters degree in higher education in 2019. He played high school football for Lakota West High School.