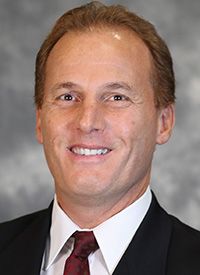 Larry Mangino begins his seventh season with the Virginia men’s basketball program and second as director of player development. Mangino served five seasons as director of scouting/recruiting with the Cavaliers. Mangino brings 35 years of coaching experience, including nine years as a head coach and two years at the NBA level, to head coach Tony Bennett’s staff.

Mangino served as an assistant coach at SMU from 2010-12. In 2011-12, SMU posted its most successful season in more than a decade, recording its first 20-win season and postseason bid since 1999-2000. Prior to SMU, Mangino spent two seasons as player development coach for the NBA’s Denver Nuggets from 2008-10.

Prior to joining the Nuggets’ staff, Mangino spent seven seasons as an assistant men’s basketball coach at the Air Force Academy (2000-07). The Falcons made the 2004 and 2006 NCAA Tournaments and advanced to the semifinal round of 2007 National Invitation Tournament.

Before Mangino joined the Academy, he was a head coach for nine seasons; first at Clark University in Massachusetts from 1991-96 and then at Ferrum College in Virginia from 1996-2000. At Clark, Mangino developed the Skills for Life program to help athletes prepare for their post-graduate careers.

Mangino is a 1983 graduate of Montclair State, where he earned his bachelor’s degree in physical education. He later earned his master’s degree in human development from George Washington in 1996.

He was a three-year basketball letterwinner at Montclair State and helped the team to the 1981 regional championship. Mangino began his coaching career at Montclair as a graduate assistant in 1983-84.

Mangino has worked as a clinician at several major basketball camps, including the Boston Celtics rookie and free agent camp. He’s also been active in community affairs throughout his career, including the Big Brother program.

Mangino and his wife, Ann, have two daughters, Chelsea and Grace. Chelsea is a former UVA student manager and current assistant athletic director/chief of staff for men’s basketball at Liberty University under head coach and former UVA associate head coach Ritchie McKay. Grace serves as the executive manager, office of the CEO at Generation Hope, a non-profit organization in Washington, D.C.