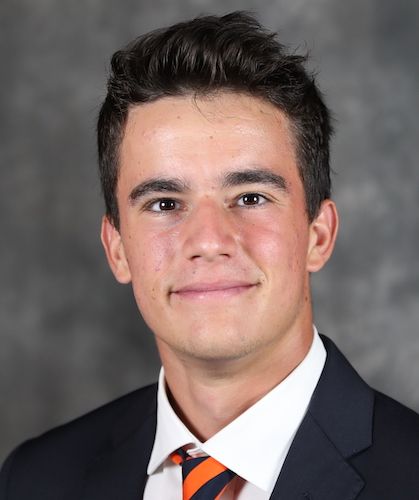 2022-23 (Senior)
• Finished the fall ranked No. 73 by Golfweek and No. 89 by Golfstat
• Helped UVA to victory at Streamsong Invitational with third-place finish
• Shot career-best -15, 201 to post his eighth top-10 finish
• Cavaliers shot school record -56, 808 at Streamsong
• Was fifth at Hamptons Intercollegiate to help UVA to repeat as tournament champions
• Tied for 45th at Inverness Intercollegiate (+11, 224)
• Recorded his 10th top-10 finish at Golf Club of Georgia Collegiate to cap the fall
• Was 10th at GCGC, shooting -5, 211

Amateur / High School /Personal
• Majoring in economics at UVA
• Ranked No. 107 in World Amateur Golf Rankings prior to the start of his senior season at UVA
• Reached match play at 2022 U.S. Amateur
• Was seventh at 2022 European Amateur
• Competed in 2022 Amateur Championship, European Amateur Team Championship and St. Andrews Trophy tournaments
• Placed 16th at the 2022 Jones Cup Invitational
• At the time he signed with UVA was the second-highest ranked Italian player in the U18 division of the European Golf Rankings
• Top World Amateur Golf Ranking prior to enrolling at UVA was 223
• A member of the Italian Golf Team since 2015, playing for coach Alberto Binaghi
• Italian Team, he won the 2018 French International Boys Championship’s Nations Cup, the 2017 Italian International Championship’s Nations Cup and the 2015 Belgian International Team Championship
• Won the championships at the 2018 Italian Boys U18 National Championship and finished ninth in 2019
• Finished first at the 2018 the Italian Amateur Match Play and was third in 2019
• Runner up at 2019 Italian Amateur Stroke Play Championship
• Placed 13th at 2019 Dutch Amateur Championship
• Had fourth-place finishes at 2019 Gran Premio Citta Di Cervia and Gran Premio di Monticello events
• Placed 18th at the 2018 Junior PLAYERS Championship
• In 2013, he was the Italian National Champion in the U12 division
• Father, Antonello, is a golf teaching professional and the current president of PGA of Italy
• Recipient of the 2022-23 Jim Copeland Endowed Scholarship