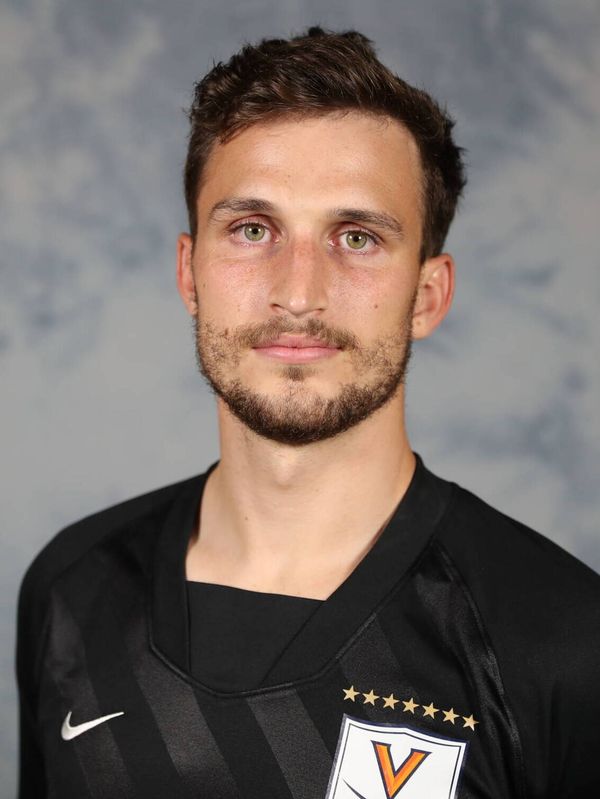 2019
• First Team All-American by the United Soccer Coaches, College Soccer News and Soccer America
• Garnered First Team United Soccer Coaches All-South Region honors
• Became the first Cavalier goalkeeper since Tony Meola in 1989 to earn First Team All-ACC accolades
• Named to the NCAA College Cup All-Tournament Team
• One of four Cavaliers listed on the ACC All-Academic Team
• Played every minute in goal of all 24 games in 2019
• Logged 2,216 minutes in goal, the fourth most ever in a single season by a Virginia goalkeeper
• His 24 games started in goal tied a school single-season record
• His 0.53 goals against average was the lowest in the country and finished the season with the country’s lowest career goals against average among active players (0.59)
• The 0.53 goals against average was the sixth-lowest and his 0.829 goals against average was tied for the 10th highest in program history
• Credited with 63 saves and boasted a save percentage of .827, the fourth-highest in the nation
• His 2,215 minutes played in goal were the second highest of any keeper in the NCAA
• Helped the Cavaliers to a national-leading, 15 shutouts and one shy of matching the school record
• Named ACC Defensive Player of the Week twice (Sept. 9 & Sept. 30) and was listed on the College Soccer News National Team of the Week on Sept. 30 and Oct. 28
• Made a season-high seven saves in the NCAA National Semifinal match against Wake Forest on Dec. 13
• Allowed one goal over the first 10 matches of the season

2018
• Played every minute in goal in the first 15 games before suffering injury prior to the NCAA Tournament
• Won the ACC Defensive Player of the Week twice -Aug. 28 & Sept. 17
• Credited with eight shutouts, tied for 16th most in the NCAA and second-most in the ACC
• The eight clean sheets were also tied for the eighth most in program history
• Posted a 0.70 goals against average, the 14th lowest in the NCAA and second lowest in the ACC
• His .796 save percentage was the highest among ACC goalkeepers
• Made a career-high 8 saves vs. Virginia Tech (Sept. 7), the most by a UVA goalie since Diego Restrepo in 2011
• Had his streak of 484 straight scoreless minutes snapped against Wright St (10/2)
• Named to the ACC All-Academic Team and listed on the ACC Academic Honor Roll

PREP
• Played club soccer with Loudoun FC’s 98B Red side
• Team was USYS National Championship semifinalist in 2015 and finalist in 2016
• Champion at Virginia State Cup in 2013, 2014 and 2016 and Region I Premier League in 2014 and 2015
• Part of 2013-14 team that was first to maintain clean sheet in National League
• Competed in several Region I ODP team events from 2012-15
• Three-year letterwinner at Briar Woods High School and was team captain in 2016
• Named First-Team All-State (Region 5A), First-Team All-Region and First-Team All-Met in 2016
• Earned 2016 Conference 14 Player of the Year honors
• Member of National Honor Society

PERSONAL
• Graduated in the Spring of 2020 from UVA with a degree in Psychology and is currently pursuing his master’s degree in Educational Psychology
• Parents are Brian and Elizabeth Shutler
• Both of his parents are UVA alums
• Has one brother, Christopher, played three seasons in goal at Binghamton University before teaming up with Colin as a grad transfer at UVA during the 2019 season.