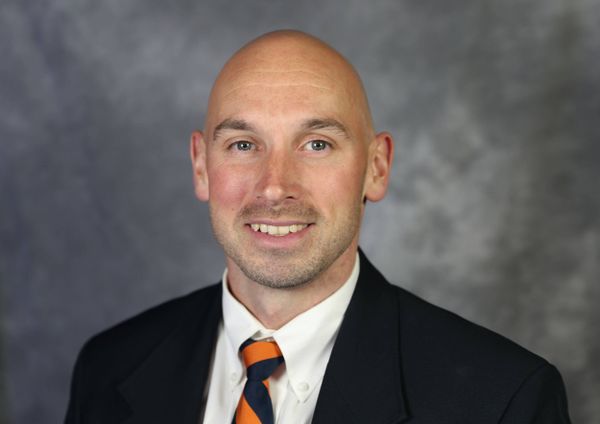 Adam Perron joined the Virginia men’s soccer coach in February of 2020. Perron came to Charlottesville after serving as the top assistant and recruiting coordinator at James Madison during the 2018 and 2019 seasons.

Perron helped JMU to two of the best seasons in program history, posting an overall record of 26-12-6. The Dukes qualified for two NCAA Tournaments and in 2018 reached the NCAA Quarterfinals for the first time since 1995. JMU became a fixture in the national polls, ranking as high as No. 14 in 2019 and topping out at No. 10 in 2018. In 2018, Perron and the JMU staff were recognized as the United Soccer Coaches Regional Staff of the Year. The Dukes won a pair of CAA Tournament titles and the 2018 Regular Season championship in his tenure. JMU goalkeepers thrived under his direction, setting the program single-season shutout record in 2018 with 13 and posting a 0.57 goals against average in the same season, third-lowest in the nation. A former collegiate and professional goalkeeper, Perron will primarily work with the Virginia goalkeepers, recruiting efforts and in-game strategy.

Prior to JMU, Perron served as primary recruiter and goalkeeping coach at Division II Southern New Hampshire University. In two seasons, Perron guided the goalkeepers to multiple accolades, including First Team All-America honors and the Northeast 10 Conference Goalkeeper of the Year award. In 2015, the team finished in the top three nationally in goals-against average with a 0.47 clip.

In 2016, Perron was the assistant/goalkeeper coach at Ohio State. In his sole year with the program, Perron’s starting goalkeeper was unanimously named to the Big Ten All-Freshman Team in addition to landing on the Top Drawer Soccer Best Freshman Second Team.

Perron played professional soccer for multiple teams in the USL-PDL, played three years with the Western Massachusetts Pioneers (2006-2009), the Massachusetts Twisters (2007-2009) and received a training camp invite from the Rochester Rhinos in 2010. Most recently Perron played in the summers of 2013 and 2014 for the Portland Phoenix in the USL-PDL, where Perron served as the team captain in the 2013 campaign.

Perron received his bachelor’s degree in sport management from Colby-Sawyer College in New Hampshire in 2006, where Perron was a four-year starter as a goalkeeper. With the Chargers, Perron sits second all-time in wins as a goalie, was a two-time All-Conference selection (2002 and 2005) and was the team MVP in 2004. Perron earned his master’s degree in liberal studies with a concentration in social sciences from Utica College in 2012. He received his National Soccer Coaches Association of America diploma in 2010.