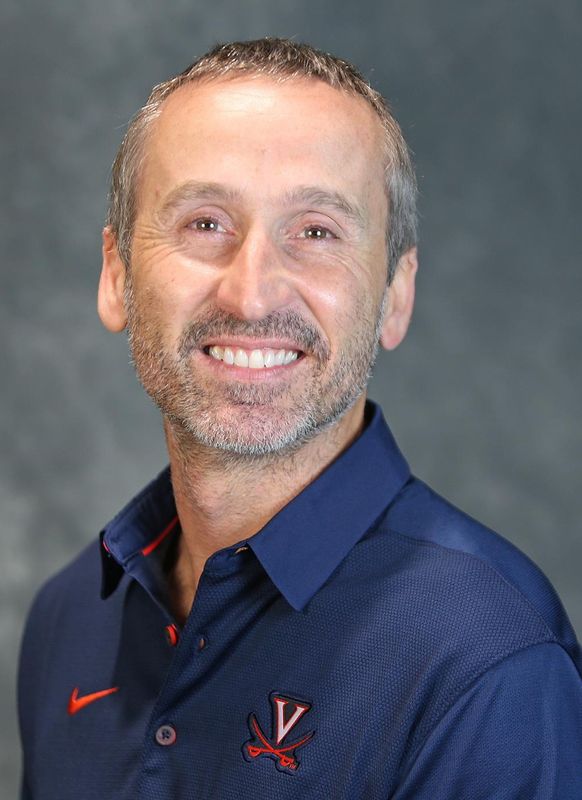 Mark Allen is in his fifth season as the head coach of the Virginia men’s and women’s squash teams since the program was named a varsity sport by the Virginia Department of Athletics in 2017.

The Virginia men highlighted their season with a thrilling win over Drexel in the Mid-Atlantic Squash Conference Championship. The Cavaliers overcame a 4-2 deficit which came down to a five-game victory for Taha Dinana who downed Fritof Jacobsson to clinch Virginia’s third consecutive Mid-Atlantic Squash Conference Championship. The women finished as runners-up in the competition as the fell to Drexel by a score of 4-5.

In 2022 Aly Hussein was named the Mid-Atlantic Squash Conference Player of the Year while Mark Allen was named the MASC Men’s Coach of the Year for the first time in his tenure with Virginia. The Cavaliers landed three CSA All-American selections between the men and women as Meagan Best (first team), Omar El Torkey (second team) and Aly Hussein (second team) achieved the honors. Between men and women the Cavaliers had 11 All-MASC selections in 2022 including five men and six women.

Allen led both Cavalier teams to strong finishes during the 2019-20 campaign. The men’s team qualified for the Potter Cup, the top division of the College Squash Association Team Tournament. The Cavaliers advanced to the consolation finals where they topped Rochester to finish fifth overall. The men’s team defeated No. 5 Rochester and No. 6 Yale during the tournament and finished the season with 19-5 record. The women’s team won the Kurtz Cup for the first time in program history. UVA finished the year with a 17-6 overall record on the women’s side and ended the year ranked ninth in the CSA rankings.

The Cavaliers saw success during the 2018-19 season as both programs captured the inaugural Mid-Atlantic Squash Championship. The women’s team concluded the year ranked 11th after finishing third at the Kurtz Cup. The team recorded a program best ranking of No. 9 during the regular season, due in large part to its 11 wins over top 25 programs. Emma Jinks finished the year ranked 21st in the CSA Individual rankings. The women’s team finished the season with an 18-7 overall record.

Virginia concluded the year ranked 12th on the men’s side, finishing the season with a 16-7 overall record. The team also ranked in the top 10 during the year, recording a season high ranking of ninth. The Cavaliers tallied 11 wins over top 25 ranked teams and tabbed a fourth-place finish in the Hoehn Cup. Patrick McElroy finished the year ranked 29th in the CSA Individual rankings.

Allen led the Cavaliers in their opening season as a varsity sport. The women’s team finished the season ranked 13th in the nation with a 14-9 record, in addition to winning the consolation finals of the Kurtz Cup. The men’s team finished the year ranked 14th, posting a 15-8 record. The Cavalier men fell in the consolation finals of the Hoehn Cup to finish sixth in the B Division. Both programs recorded their best rankings in history during the season.

Allen served as the head coach for the Virginia men’s and women’s club squash programs as well as the director of squash at Boars Head Sports Club from 2013-17.

Under Allen’s leadership, the Virginia men’s and women’s club squash programs held rankings inside the top 50. The men’s team was ranked 19th at the conclusion of the 2017 season, while the women’s team ranked 13th. Both programs were the No. 1 ranked club team nationally for the 2015-16 and the 2016-17 seasons.

Prior to Virginia, Allen coached in Cape Town, South Africa as the head coach at the Western Province Cricket Club from 2007-13. Allen built the program into one of the strongest junior squash teams in the country with eight club junior players achieving a No. 1 South African junior ranking.

During this time, Allen was the head coach and manager of the U.S. National Junior Women’s team. He coached the program to a fourth-place finish at the 2005 World Junior Championships, at the time a program best in a world championship event. Allen coached the team for two years, 2004-05.

In 2000-03, Allen worked with the National Capital Squash Racquets Association teaching the sport in the area for Northern Virginia and Washington, D.C. area. Additionally, he coached at Potomac High School.

Allen began his coaching career as the coach and director of squash for the Guernsey Squash Racquets Association. During his two years of coaching (1998-2000), Allen taught England’s No. 1 junior player, Chris Simpson, and was the coach and manager of the Guernsey squash team that competed in the Commonwealth Games in Kuala Lumpur.

In 1993, he attended Nottingham University where he received a B.A. in industrial economics. He captured three British University individual championship titles in addition being captain on the 1996 World Student Games champion squash team.

He currently lives in Charlottesville with his wife Tracy and their two children, Daniel and Jayden.