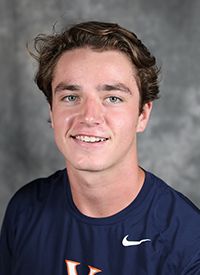 2021-22
• Competed in five matches for Virginia compiling a record of 4-1
• Recorded a win for the Cavaliers at the MASC Championships competing at the No. 9 position against Dickinson
• Recorded two wins against ranked opponents

2020-21
• ACC Academic Honor Roll
• Played in the second match against Navy, picking up a victory while playing at the No. 4 position

2019-20
• Captured a point in the team’s win over Rochester at the Potter Cup
• Concluded the season playing at the No. 7 position in the Cavalier ladder
• Recorded a 13-5 record
• Won matches against Dickinson and George Washington at the Mid-Atlantic Squash Championships
• Recorded the deciding point in the team’s win over then-ranked No. 13 Western Ontario
• Named to the ACC Academic Honor Roll