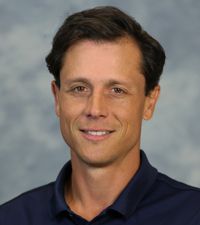 On May 24, 2017, Andres Pedroso was named the Cavaliers’ director of tennis and head men’s tennis coach, overseeing both the men’s and women’s tennis programs while also serving as the head coach of Virginia men’s tennis. As the director of tennis, Pedroso is charged with oversight of both programs while serving as the head coach of the men’s tennis program. This model enables the UVA men’s and women’s programs to collaborate and make the best use of all available resources while sharing a joint vision for success that meets the goals set by the Virginia athletics department.

In 2022, Pedroso won his first NCAA title as a head coach, leading the seventh-seeded Cavaliers to a 4-0 victory against Kentucky in the final. The championship match was the 100th career victory in his head coaching career. Pedroso originally served as Virginia’s associate head coach from 2010-14, helping to lead the team to winning its first NCAA Men’s Tennis Championship in 2013.

Pedroso was named the 2022 Wilson ITA National Coach of the Year, the third time in program history that a Cavalier head coach won the honor. He was the 18th different individual to be named the national coach of the year for their sport while coaching at UVA and tallied the 34th overall coach of the year honor in the department’s history.

The Cavaliers played one of the toughest non-conference schedules in the country in 2022, starting the season with a 5-5 record after suffering five losses against teams that were ranked No. 1 at some point during the season. The Cavaliers rebounded by winning 17-straight matches, including going 12-0 in the ACC and powering through three matches in the ACC Championship to win the title for the 14th time in program history, earning a No. 7 seed in the NCAA Tournament and a chance to host Regionals and Super Regionals in Charlottesville. The Cavaliers outscored their opponents 25-1 in the six matches of the championship, with only 2021 NCAA Champion Florida managing to win one singles court against the Hoos in the quarterfinals. The championship was the fifth title for the program in a 10-year span and its second time winning in Champaign, Ill.

The foundation was set in his first season at the helm of the Cavaliers when the team made its 15th-consecutive NCAA Championship appearance and had two players selected to compete in the NCAA Singles tournament. Before the season even began, Pedroso made an impact in building the future of the program, signing three top-ranked recruits including Gianni Ross, who joined the program in January of 2018. Ross, ranked the No. 2 recruit in the 2017 class, went on to be named the 2018 ITA Atlantic Region Rookie of the Year, and as a fifth year, would be named the 2022 NCAA Championship Most Outstanding Player after going 3-0 at the finals site and clinching the championship match against Kentucky. Under Pedroso’s guidance that first season, junior Aswin Lizen won the ITA Atlantic Regional singles title in the fall and went from unranked to a top-10 ranking in the Oracle/ITA singles rankings.